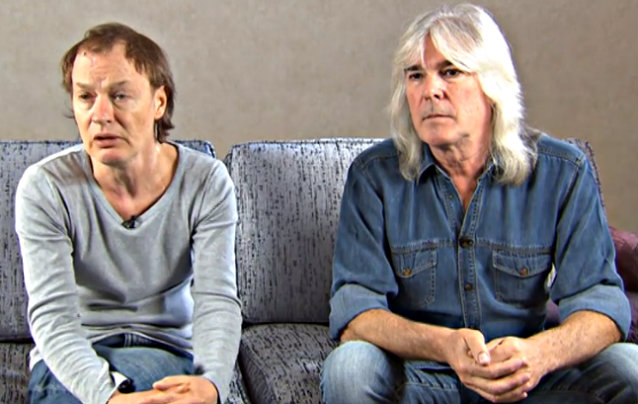 AC/DC's ANGUS YOUNG On PHIL RUDD: 'His Behavior Has Been A Bit Strange'

"HardDrive" producer Roxy Myzal recently conducted an interview with AC/DC guitarist Angus Young and bassist Cliff Williams. You can now listen to the chat in the YouTube clip below.

Speaking about AC/DC drummer Phil Rudd, who was missing from the band's new publicity photo and was also a no-show at the group's video shoot on October 3 and October 4 for its two new singles, "Play Ball" and "Rock Or Bust", Angus said: Getting him there to do the [new AC/DC] album ['Rock Or Bust'] was quite tough too. His behavior has been a bit strange. 'Cause when we were doing the album, one minute he was coming, the next minute he wasn't coming. So it took quite a while to get him to the studio. When he got there, he did a great job. [But] it's not the Phil that we'd known all over the years. He knew that we were promoting the album and doing stuff [like photo and video shoots),and again he said he'd be there and no, last minute, again, he didn't show."

Rudd was arrested in New Zealand in early November on charges of attempting to arrange a murder, threatening to kill and possession of methamphetamine and cannabis.

The murder-for-hire charge was dropped quickly but Rudd still faces several years in prison if convicted of the others.

Said Cliff: "He's got himself into some sort of situation. He's gotta sort himself out. It's not gonna happen overnight. We're gonna move forward."

Added Angus: "It's unfortunate, because he's a great drummer. He's been with us… We go way back. But it was just making it difficult for us. What do we do? You can't plan anything. If anyone says, 'You wanna do this?' It was making it too difficult to go forward."