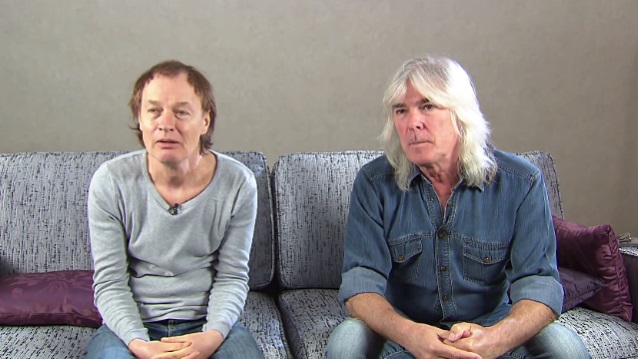 AC/DC's ANGUS YOUNG: 'The Audience Is Part Of What We Do, And We Feed Off The Audience'

AC/DC members Angus Young (guitar) and Cliff Williams (bass) were recently interviewed by Belgium's Studio Brussel. You can now watch the chat below.

As previously reported, AC/DC drummer Phil Rudd spoke to ONE News for the first time since his arrest last month on charges of drug possession and threatening to kill, calling the charges "ludicrous" and saying that he fully intended to remain a member of AC/DC. Rudd said, "This has just been a big ball of cheese and all the rats are gathering and having a piece. That's just life, but that's not who I am. I want my job back, I want my reputation back, and I'm gonna get it back."

Rudd added, "I'm going back to work with AC/DC. I don't care who likes it or who doesn't. Everyone listens to the wrong people. They should listen to me. I'm a good guy, and I'm a pretty good drummer, by the way. Ask Angus. He'll tell you."

Angus Young told The Pulse Of Radio it wasn't Rudd's skills that were in question, but his recent erratic behavior. "He is a great drummer, you know," he said. "He's been with us, you know — we go way back. But it was just making it difficult for us. What do we do? You can't plan anything, you know. If anyone says, 'Well, you wanna do this?', it was making it too difficult to go forward, you know."

Rudd was initially arrested for allegedly approaching an unidentified man and trying to hire him to murder two people, as well as threatening a man and his daughter's lives and possessing marijuana and meth.

The "murder for hire" charge was dropped, with the man later coming forward to claim that Rudd attempted to hire him as a bodyguard, not an assassin.

Rudd still faces the charges of drug possession and "threatening to kill" and is due in court on February 10 for a hearing on the latter.

Although he did play on "Rock Or Bust", Rudd failed to show up for video and photo shoots. The band has not indicated whether Rudd will officially be replaced for its upcoming world tour.