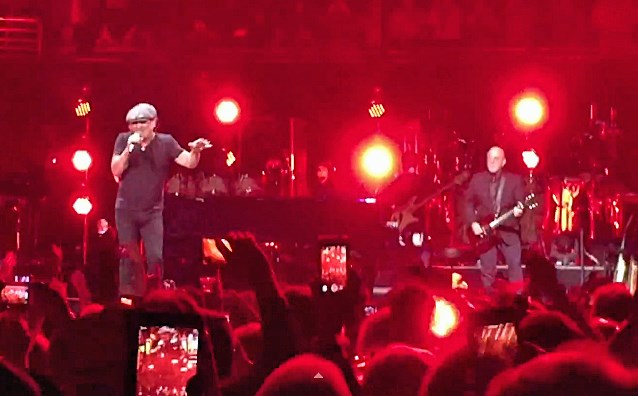 AC/DC singer Brian Johnson joined Billy Joel on stage this past New Year's Eve (December 31) at Amway Center in Orlando, Florida to perform the AC/DC classic "You Shook Me All Night Long". Fan-filmed filmed video footage of Johnson's appearance can be seen below.

Johnson previously sang "You Shook Me All Night Long" with Joel on March 21, 2014 at Madison Square Garden in New York City.

Joel has been known to cover AC/DC's "Highway To Hell" during his concerts, and had sung the track live with Johnson before, but the Madison Square Garden show was the first time the two have performed "You Shook Me All Night Long" together.

AC/DC's 16th studio album, "Rock Or Bust", sold around 172,000 copies in its first week of release to debut at No. 3 on The Billboard 200 album chart. The CD was released on December 2 and is AC/DC's first album without guitarist Malcolm Young, who is suffering from dementia. He has been replaced by nephew Stevie Young.