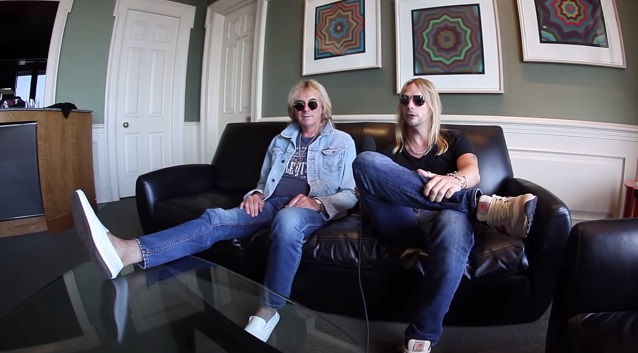 JUDAS PRIEST guitarists Glenn Tipton and Richie Faulkner were recently interviewed by Masanori Ito's "Rock City" program in Japan. You can watch the chat below.

Asked by Premier Guitar if he was concerned how the new band dynamic with Faulkner would impact the writing process for "Redeemer Of Souls", Tipton said: "We hadn't worked with Richie before on a writing level, so the first couple of things he presented to us were quite crucial. It was amazing, because everything Richie came up with was just so PRIEST, and it evolved from that point on. For the first time ever, we actually wrote on the road. Richie would go down in the afternoon, set up his recording rig, and kick stuff out. When we had time off, we sat down and started piecing everything together. What we normally do is write our own ideas — including Rob's [Halford] lyrics and vocals — pool them, and before you know it, it takes shape into songs."