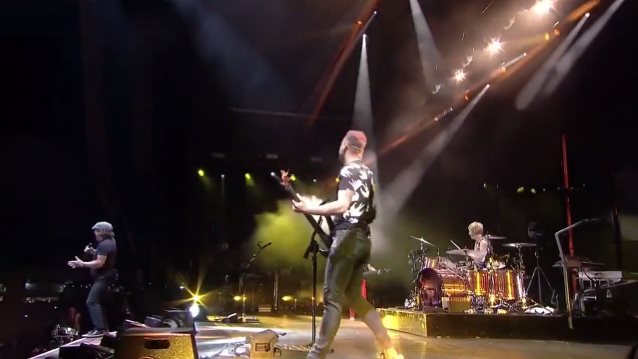 AC/DC singer Brian Johnson joined MUSE on stage Sunday night (August 27) at the Reading Festival in England to perform his band's iconic track "Back In Black".

Johnson appeared with the trio on stage at the start of the encore. MUSE frontman Matt Bellamy told the crowd: "He's back!" before they launched into the AC/DC classic.

"Thank you so much. Thank you, boys," Johnson said at the end of the song, hugging Bellamy.

Tonight's appearance was Johnson's second time on stage since leaving AC/DC in March 2016 due to hearing issues.

Back in May, Johnson and LED ZEPPELIN frontman Robert Plant joined Paul Rodgers for an encore performance of Barrett Strong's 1959 classic "Money (That's What I Want)" in Oxford, England.

😱😱😱 @Muse promised us special guests and boy did they deliver!#ReadingFestivalpic.twitter.com/Y2qXuQeV8g

Muse AND acdc. It's my dirty dreams come true pic.twitter.com/75rdEmhvG6