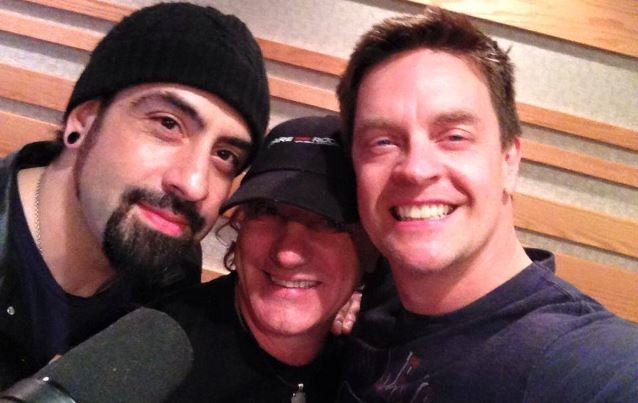 AC/DC singer Brian Johnson has recorded a guest appearance on the upcoming rock album from Jim Breuer, comedian, SiriusXM host and diehard heavy metal fan. The CD, which is being produced by former ANTHRAX and current VOLBEAT guitarist Rob Caggiano, is tentatively due before the end of the year.

During an appearance on the "Opie Radio" talk show, Breuer recalled Johhson's studio session for the track that will be included on the comedian's album. He said (hear audio below): "[Brian] comes in the studio… Dude, let me tell you something… Why this guy is a real… probably the only rock star that does this. He comes in there and goes, 'Ah, I'm ready to go.' And we go, 'Well, we're ready for you whenever you're ready. We've got this studio.' So he goes, 'Fuck! I ain't going in there. I wanna do it right here in the fucking board room. That's where I record. And I don't want no headphones; that's fucking cheatin'. I wanna stand here with a mic like I'm on stage.' And he recorded in the board room with no headphones — just standing there. I mean, he was sweatin'; he was so into it. But [the song is] perfect for him."

He continued: "Before [Brian] came in, I laid the vocals down to kind of give him an idea to sing along to it. That's what the producer does for me. I don't know my voice. I can imitate people. I can do Ozzy [Osbourne] or I can do James [Hetfield], or whoever, but I don't know what my real voice sounds like. So I didn't know what I was gonna sound like. So what the producer would do is, like, 'Breuer, you need to hit this note…' So he would go in and go, 'Sing it it the way…' and then I'd listen and copy. So that's what we did for Brian. And [Brian] comes in, and he's listening [back to his tracks], and at one point it was me, him, the producer and one other guy, and we're listening to [the song], and none of us knew who was doing [the lead]. I went, 'No, that's… Wait. That's Brian.' And Brian's, like, 'No, that's not me. That's Jimmy.' And I'm, like, 'No, Brian. That's definitely you.' And he was, like, 'Fuck no. I know my fucking voice. That's fucking you, Jim.' And then the producer's, like, 'I think it's… No, it's you, Brian… No. Fuck! Maybe it is Jim.' We had no clue who it was. We had no clue."

Breuer previously stated about his upcoming album: "I think the music is going to be very respectable. I think it's going to surprise most people. I think the hard rock, metal world will embrace [it], where many other people who thought it was going to be really funny will think, 'Oh, he really wasn't that funny in it. He wrote some real songs.' So, I don't know what to expect from it, but it's definitely hard rock and metal for my generation."

Asked if he gets more starstruck when he meets certain musicians as opposed to meeting legendary comedians he idolizes, Breuer said: "I definitely, hands down, 100 percent am more comfortable around the rock guys because I just instantly feel like I relate to them much easier. We're not competing, there's no animosity, there's a general respect and a mutual respect for one another. I really enjoy being in the rock world. They're funny, 90 percent of them are funny. And they're guys that you would just hang out with and it's awesome."

In a recent interview with The Aquarian Weekly, Caggiano stated about his involvement with Breuer's album: "[Jim is] a big comedian in the States. He's making a rock record and I'm producing it and I'm also playing the guitar and writing all the music and stuff. But, yeah, we had Brian Johnson on one of the tracks and that was amazing. It was surreal. One of my idols."