According to Britain's Q magazine, Malcolm Young, who is suffering from dementia, a condition that has forced the guitarist to leave AC/DC, was faced with two other massive health scares after the conclusion of the group's marathon 20-month tour in support of 2008's "Black Ice" album. First, he was diagnosed with lung cancer, which was detected early, enabling surgeons to operate on the guitarist successfully. Then, he discovered he had a heart condition, which singer Brian Johnson only learned about while having dinner in London with Malcolm and his wife one evening a couple of years ago.

"This is typical Malcolm — he got a hold of my hand and went... [bangs repeatedly on his chest]" the vocalist told Q. "He says, 'Pacemaker. Fucking good, mate.' He scared the shit out of us! And there's a twinkle in his eye, he was tickled pink. It's like he was showing us a new fuzzbox or something!"

Meanwhile, Malcolm's brother Angus, who had begun working on ideas for songs, was posed with a dilemma: whether or not AC/DC should continue on as a touring and recording act without Malcolm. He sought advice from his older brother George, the ex-EASYBEATS frontman who co-produced many of AC/DC's early albums, but eventually made the decision himself.

"Any time I saw [Malcolm], I'd be asking him whether the band should carry on," Angus told Q. "I was even asking him, 'Are you picking up your guitar?' And a lot of times he wasn't. Communication was hard. You kind of know then – what you're saying is not getting through. So I thought: 'Do I keep going?' I talked with my brother George, and George always said, 'It's really what you want. Do you think you should go forward…?' I said, 'It's not easy.' And he said, 'You know Mal better than anyone. Mal always liked to go forward, to play on.' I thought, 'OK. I'll give it a shot. I'll try.'"

Angus Young recently spoke to GMI Rock about his brother's health issues, explaining (hear audio below): "Besides the mental side with the dementia, he had physical problems also. He had a lung operation, which was pretty critical, but he got treatment for that because they got to it. It was like a cancer. So they got that early and then later on he had also a heart problem. So it was like everything hit him at once... But he kept going as long as he could... You were hoping that he would get better, y'know, but unfortunately it's a disease... The physical side of him, he got great treatment for all that so he's good with all that, but the mental side has deteriorated. He himself had said, 'I won't be able to do it anymore.'"

Angus Young told Sweden's Aftonbladet that his nephew Stevie was the first person he thought of as a possible replacement for Malcolm. He said: "The logical choice to fulfill Mal's role on the project was my nephew Stevie. He had filled in for Mal in 1988 and he had done an American tour, a whole American tour, and he did it well."

Angus told The Pulse Of Radio that Stevie was a natural fit. "He just plugged into what we were doing, 'cause he's of the same age era as Malcolm and myself," he said. 'He was my eldest brother's son. You know, we all grew up together. Mal played that style how he played that rhythm style. Stevie, you know, he emulated that."

Asked if it was emotional for AC/DC to continue without Malcolm, Angus said, "When we were recording and listening, I didn't notice. Yeah, when you look, [you go], 'Yeah, it's not Malcolm.'" 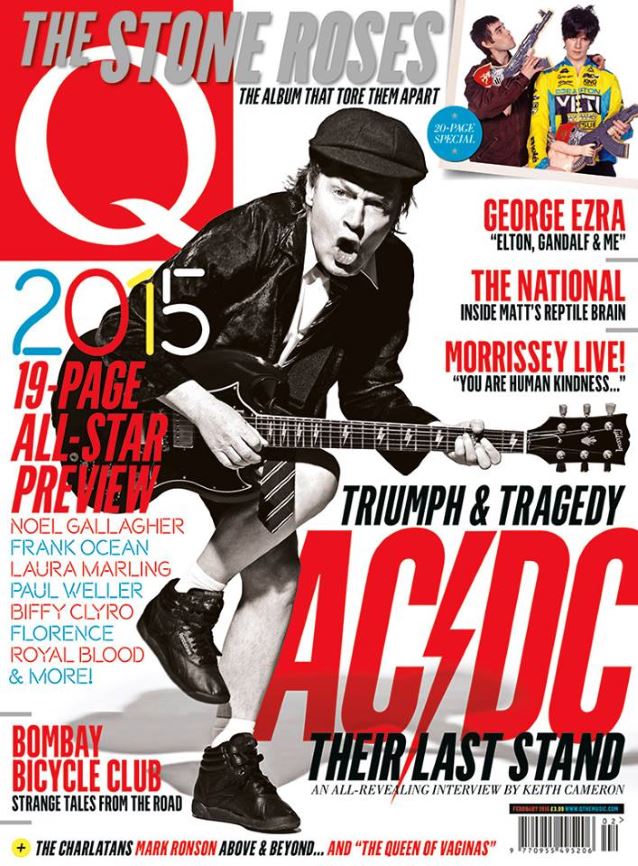