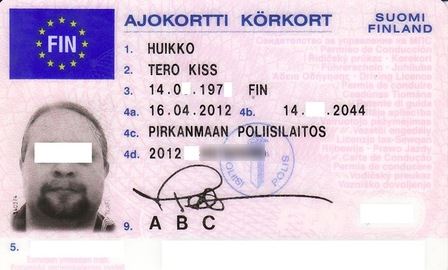 A Finnish man who had his middle name legally changed to Kiss says he has not regrets about the move, claiming that he has "won lots of bets" because of his name.

40-year-old Tero Kiss Huikko, who officially changed his name in the early '90s, tells Radio Nova music journalist Samuli Väänänen: "The idea came about when my friends tested my KISS knowledge by playing short one-second clips of various KISS songs. They got bored when I knew every song and told me that 'your name should be Kiss.' Well, it wasn't yet, but that's when I got the idea to change it."

After a few failed attempts, Huikko was finally allowed to change his middle to Kiss.

"There hasn't been any problems [since then] and I haven't regretted my decision," he says. "I've won lots of bets because of my name, no one has won as many free beers and pizzas as me," he laughs.

Tero adds: "All in all, at least it is a unique name."

After all these years, Huikko still loves the band.

"I listen to KISS every day," he tells Radio Nova. "They've given me lot. Because of them, my English is very good, [and] it has been since grade school. When I speak English, I also have a New York accent, which I've gotten from [listening to] KISS."

A picture of Tero Kiss Huikko's driver license can be seen above.