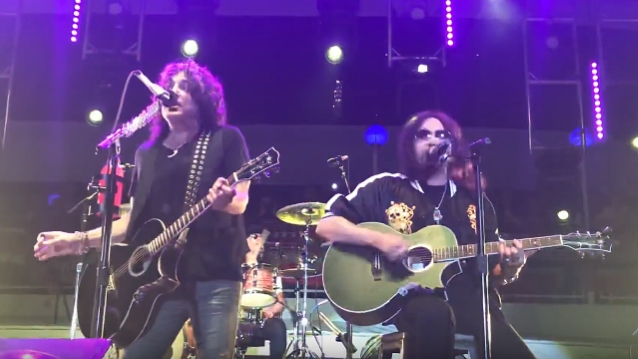 The legendary rockers — Paul Stanley (vocals, guitar),Gene Simmons (bass, vocals),Tommy Thayer (guitar) and Eric Singer (drums) — are playing multiple shows during the eighth installment of their seagoing extravaganza, which embarked yesterday from Miami and will visit Key West, Florida, and Nassau in the Bahamas before returning to port on November 5.

Frehley, whose solo band is one of the artists performing on the cruise, took the stage during KISS's acoustic show on Wednesday and played four songs with the current KISS lineup: "2000 Man" (THE ROLLING STONES cover, which Ace sang on KISS's 1979 album "Dynasty"),"New York Groove" (HELLO cover, which appeared on Ace's 1978 debut solo album),"Nothing' To Lose" and "Rock And Roll All Nite". Kulick, who is also one of the cruise's scheduled performers, joined in on acoustic guitar.

"Life is full of coincidences," Stanley joked before Frehley's appearance. "Here we are, on a ship... Bruce Kulick just happens to be on this ship. And someone just said, 'You know who else is on this ship?' Ace Frehley! So, let's bring him up too."

Right before kicking into "Nothin' To Lose", Ace got emotional, telling the crowd and his formed bandmates: "This is great... this is so great. Thank you guys for inviting me up." Stanley then added: "Ace, hold on a second. All this couldn't have happened if we hadn't happened. We started this. So thank you for being here."

Earlier in the evening, Kulick reunited with KISS for performances of the "Revenge" track "Domino" — which KISS hadn't played live since 1995 — and "Hide Your Heart".

Last month, Ace told ABC Radio that the cruise could possibly feature one or more reunion performances with KISS. "Anything can happen on this cruise, and I think the fans are expecting something special," he said. "Either I might be invited onstage or I might invite Paul or Gene, or both of them. We'll see what happens…It's a 'Kiss Kruise' and the sky's the limit."

Frehley — whose new solo album, "Spaceman", was released last month via eOne — first left KISS in 1982. He rejoined in 1996 and parted ways with the band once again in 2002 after the conclusion of their first "farewell tour." Ace said that both times he left KISS were by choice. "I remember the first time I wanted to quit the band," he recalled during a "live conversation" on September 25 at Musicians Institute. "Gene called me up and goes, 'Ace, you don't have to leave the band if you want to do a solo record. You can still stay in KISS. We'll even take a break and let you do it.' They didn't want me to leave. They never wanted me to leave, and I quit the band twice. If you look at old interviews, sometimes they would lump me in with Peter and say, 'Yeah, we fired Peter and Ace.' They never fired me — I always quit. I want to make that clear." 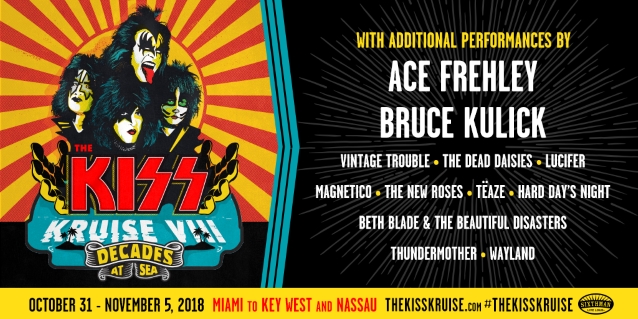