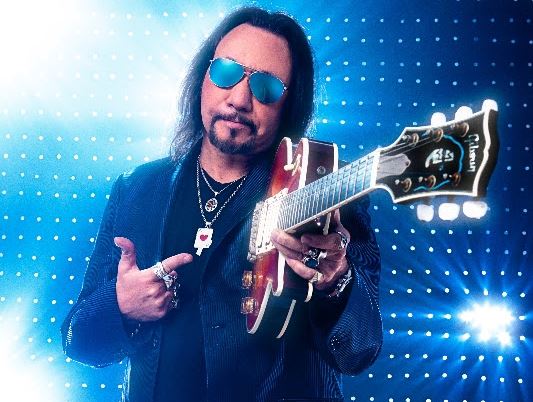 Rock And Roll Hall Of Fame inductee Ace Frehley will perform on "The Tonight Show Starring Jimmy Fallon" next Tuesday, August 12. The former KISS guitarist will sit in with the house band THE ROOTS for the program's entirety.

In other news, Frehley will take part in a one-time-only in-store appearance and signing at the Best Buy in Union Square, New York City on Tuesday, August 19 at 6 p.m. Fans will be able to get their own copy of Fehley's new album, "Space Invader", signed by the Space Man himself.

"Space Invader", the first new solo album from Frehley in five years, will be released in North America on August 19 via Entertainment One Music (eOne Music). The CD, which will be made available in Europe on August 18 (three days earlier in Germany and Scandinavia) through SPV/Steamhammer, will include 11 brand new original songs as well as a cover of Steve Miller's "The Joker".

Frehley has released the first single from "Space Invader". "Gimme A Feelin'" is now available on iTunes. You can also stream the song below (courtesy of RollingStone.com).

Asked what the songwriting process was like for "Space Invader", Frehley told Guitar World magazine: "You know, all my life I've never had a formula for writing songs. Sometimes it starts with a guitar riff, sometimes it's a lyrical idea or just a melody. Sometimes I wake up with an idea. There's no rhyme or reason. Sometimes I write on an acoustic, sometimes on a bass. There's a song on the new album called 'Into The Vortex'. It's a riff song, but I wrote it on a bass guitar. Why? Because I write differently with a bass guitar in my hand than an acoustic guitar or an electric guitar. When I feel creative, I just sit down and start playing."

Ace also spoke about the recording process for "Space Invader", telling Guitar World: "I did most of the recording at my friend's studio in Turlock, California, called the Creation Lab. Turlock is in the middle of nowhere — it's like a farming community — and that's why I loved it. I have Attention Deficit Disorder, and there are absolutely no distractions when working at this place. You record for eight or 10 or 12 hours, then you go back to the hotel and go to sleep. You wake up and go back to the studio. There's nothing else to do there, which means it's the perfect place for me to record. Plus, I like working with the least amount of people, and this studio is great because it's quiet and there aren't all kinds of people walking through. I did most of this record with just me and a drummer, Matt Starr. For a couple of songs I brought in Chris Wyse from THE CULT to play bass."

On the topic of whether there were things about 2009's "Anomaly" that he wanted to change with "Space Invader", Ace said: "I know that everyone is hoping that this album is heavier than the last one, and it is. I'm also doing an instrumental this time, called 'Starship', that isn't slow. It's a departure from the 'Fractured Mirror' style. It's more fast paced and has a lot of transitions in it."

Frehley also explained his decision to cover Steve Miller's "The Joker", saying: "It was the record company's idea, to be honest. And I was a little resistant when it first came up. But then I thought back to my 1978 solo record, when [producer] Eddie Kramer's assistant said to me, 'Why don't you try this song?' And it was 'New York Groove'. At first I said, 'I don't want to do that,' and it turned out to be my biggest hit. So maybe history can repeat itself."