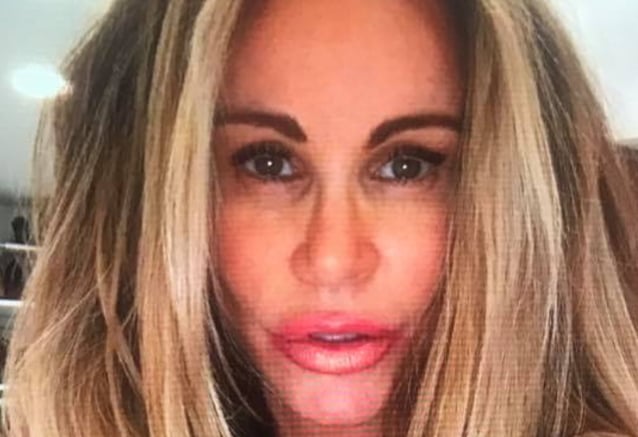 Actress Julie E. "Tawny" Kitaen, who is best known in the rock world for her appearance in WHITESNAKE's video for "Here I Go Again", has died at the age of 59. According to Variety, the Orange County, California coroner's office, which listed her as Tawny Finley, stated that she died at her home in Newport Beach on Friday morning (May 7),but a cause of death has not been revealed.

Tawny's children — Wynter and Raine Finley, whom she shared with ex-husband, baseball player Chuck Finley — confirmed their mother's passing, writing in a statement: "We are heartbroken and saddened to announce the death of our mom. We just want to say thank you for all of you, her fans and her friends, for always showing her such support and love. You gave her life everyday. We miss her and love her and we know her legacy will live on forever."

Last June, Tawny told "Ouch, You're On My Hair" about how she ended up being featured in the WHITESNAKE videos: "Ironically, I started dating David. He was two million dollars in debt to David Geffen at that time. I was working and had more money than David at that time, so I kind of supported us a little. And when I heard the album and I was allowed to go in and help mix the album… You know how when you sing different tracks, they give you a piece of paper and you pick the word from the best track. So I was able to do that. And John Kalodner, who was the biggest A&R guy in the business, who works for David Geffen, in my 'E! True Hollywood Story' called me Yoko Ono — because I picked the album covers, I picked the single, I picked the photographer. I made the rule that no girls were allowed backstage, so the groupies must have hated me.

Earlier today, Coverdale tweeted: "Just woke up to some very sad, unexpected news…Waiting on confirmation…but, if it is true, my sincere condolences to her children, her family, friends & fans…"

Just two months ago, Kitaen appeared on an episode of the Internet show "The Metal Summit". You can watch the episode below.

Just woke up to some very sad, unexpected news…Waiting on confirmation…but, if it is true, my sincere condolences to her children, her family, friends & fans…🙏🙏🙏 pic.twitter.com/ioerp3ZRPa