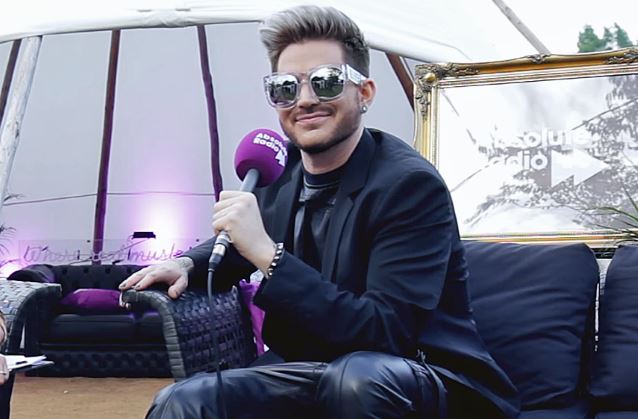 ADAM LAMBERT On Performing With QUEEN: 'I'm A Fan Just Like Everybody In The Audience'

"American Idol" finalist Adam Lambert — who has been singing for QUEEN on their tours, filling in for his idol Freddie Mercury — was asked by Absolute Radio at this past weekend's Isle Of Wight festival if he has found a balance between paying respect to Freddie and adding his own flavor to QUEEN. He responded (see video below): "That was my big mission when we started [playing together] four years ago. And that's what I didn't know about. That was the most nerve-wracking part about all of this: Can I do these songs? Am I gonna pull it off? And I think when we started four years ago, we figured it out, and luckily, fans were very repective, critics were receptive. And so, now it's exciting, 'cause I get to go on stage out of pure joy. I don't feel the nerves now. I feel excited every night to connect with whatever audience we have in front of us and to give them a show. It's all about bringing these songs back to life, paying respect to Freddie, who was incredible — he was an incredible writer, a vocalist, a performer. I think the thing that I've realized is that I'm a fan just like everybody in the audience, so we're in the same boat, really. We're getting to celebrate together."

Lambert also expressed his satisfaction over the fact that he has been able to perform with QUEEN while also pursuing a successful solo career. He said: "I feel like the luckiest guy in the world, because I get to do both parts of my career; I get my solo career, doing current pop-dance music about my life, kind of looking forward, and then I get to moonlight with QUEEN, who are one of the greatest rock bands of all time. I get to sing some of the greatest music ever written for fans that are obsessed with this band. So both sides of my artist are very satisfied."

During a separate interview with Metro, Lambert addressed rumors that he may collaborate with QUEEN on new music in the not-too-distant future. He said: "I heard that same thing. I don't know where [the rumor] came from. You know, I say never say never. We're all very open-minded. Nothing has been presented at this point. We all have a lot of projects going on, a lot of things in the pipeline. I'm really just focused on all the things in my life that I get to juggle."

After completing QUEEN's European tour in January 2015, guitarist Brian May described Lambert as the only singer the band had found capable of filling Freddie Mercury's shoes. "Adam is the first person we've encountered who can do all the QUEEN catalogue without blinking," said May.