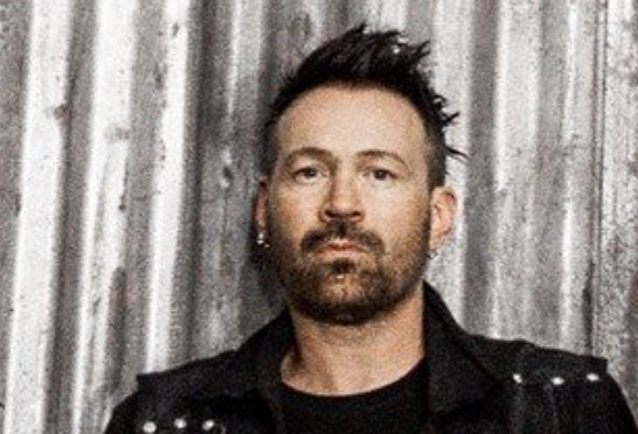 During an appearance on the latest episode of the "J-Bunny's Music Hub Podcast", ADEMA's latest singer Ryan Shuck, who joined the group in 2019, was asked if he thinks there is a chance the band will at some point work with original ADEMA frontman Marky Chavez again. He responded (as transcribed by BLABBERMOUTH.NET): "Oh, no, no, no. There's not a chance. No, no, no. I own this. There's no option for that. No, not at all. I tried to put it together with Marky. That's how I ended up accidentally offering, or accepting, their kind of plea for some, 'Hey, will you come in and sing for us for a tour?' And it just turned out so well that I kept doing it.

"No, there's no chance [of Chavez returning to the band]," Ryan repeated. " Unfortunately, Marky's jumped in, told them that he's gonna do it and then he's jumped out and pulled the plug on too many big tours, on too many good things, and it's damped the band so badly.

"Marky's really not been a great person and hasn't really respected the art and the fans and the band, and obviously isn't doing it anymore at all — you know, just doesn't seem to care.

"These guys will go play," he continued. "If they get a tour offer, the guys will do it — they'll do it at the drop of a dime. And you have a situation with Marky where he continually pulls the carpet out from under the band. And all they've wanted is for a singer to have his shit together. I happen to be that guy. The multiple singers they've had have not had their shit together — they haven't had the experience that I've had and they haven't had the vision or the management or the things that I bring to the table.

"I think that the performance of the two singles [ADEMA has released so far with Shuck on vocals] are evidence, proof that [producer] Amir [Derakh] and I know what the fuck we're doing. They're performing better than any of the singles they've released on major labels with any of the past singers, and they're performing on par with the original ADEMA stuff. I have all the numbers because I am the record label. And it's doing really, really well. So, for me, that was sort of the indicator of whether I should keep doing it or not.

This past June, ADEMA released a new song, "Violent Principles". It was the follow-up to ADEMA's first single in nearly a decade, "Ready To Die", which came out in August 2021. Both tracks are taken from ADEMA's upcoming album, "360 Degrees Of Separation".