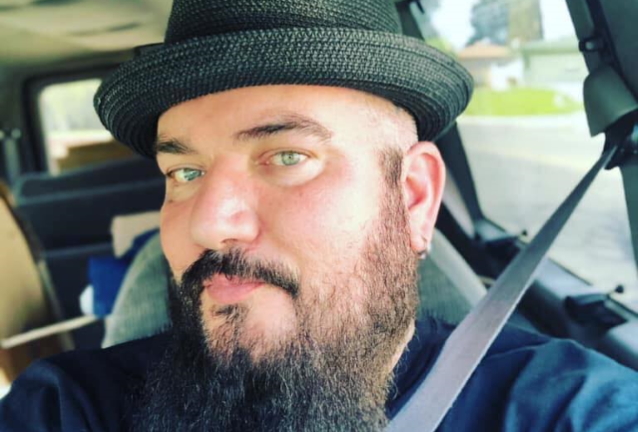 ADEMA bassist David DeRoo has urged people to wear face masks after he was diagnosed with COVID-19.

Earlier today (Saturday, July 18),DeRoo took to his personal Facebook page to say that he originally believed COVID-19 was blown out of proportion and was questioning "how 'real' it is/was." But once he started experiencing the usual COVID-19 symptoms, including loss of taste, fatigue, body aches and fever, he took himself to the emergency room at a local hospital where he was tested for the novel coronavirus.

The musician, who says he has pre-existing conditions which put him at more of a risk than someone with no underlying health issues, now admits that he was "careless and callous" in the days leading up to his diagnosis and says that COVID-19 should not be treated as a political issue.

"How's everybody doin'? Been laying low for a bit. A few of my close friends know, but I just wanted to take a sec to get everyone up to speed, and fill you all in on my situation....

"On Wednesday, July 1st I started feeling some chest congestion, and had a slight cough. I didn't think much of it, as I had been doing some work outdoors in the heat for a few days, and assumed maybe it was just my allergies, coupled w/ some dehydration? I went out that night anyway for 'one last hurrah' since it was the last night before everything was shutting down again. Woke up feeling worse. Friday night had aches, shooting pains in my back and kidneys, and a fever. Sufferered thru it all 4th of July weekend.

"I drove myself to the ER that Monday. Felt dizzy, and weak. Got there around 2pm. They tested me for Covid-19. My blood pressure, and Oxygen levels were good, so they threw me out around 7pm, and told me to monitor my breathing, and to drink plenty of fluids. They called me that Thursday, July 9th and told me I had tested positive for Covid-19. And that a 14-day quarantine would begin starting from that point. I said, 'Hey! I've already been in bed a week?'

"She didn't laugh. And the days that followed weren't fun. Or 'funny'. I had zero appetite. There were a couple of days where I didn't have a bite of food the whole day? And if I did: I couldn't taste it. That shit is real! Zero energy. I slept 10 to 15 hours some days. But since last Sunday, I‘ve started feeling better. I'm still shaking off this fatigue, and force myself to eat to keep my energy levels up....

"Moral of the story: Wear a fucking mask, people! I've had my reservations about this thing. About how 'real' it is/was. I've been careless, and callous. 'Oh: it won't happen to me?' I've been watching friends arguing about this, politicizing it: throwing away friendships over it! I have pre-existing conditions. My lungs are a cause for concern. I've had bronchitis 3 times in less than 2 years. I have high blood pressure. It fucked w/ me a bit. But here's the thing: what people DON'T know about this is what concerns me. The 'experts' are still tryin' to figure this shit out... We know NOTHING. which brings us to the next item of business...

"My band ADEMA is scheduled to play a live broadcast concert later this month, Sunday July 26th. Unfortunately, I will not be participating in this event. Believe me: nobody is more bummed than I am! As disappointing as this is: I would would be absolutely DEVASTATED if I got one of my brothers sick. 'Could/would I be well enough to play? It's still a couple of weeks away?' Possibly. But as I stated earlier: even the 'experts' don't know enough about this, yet. And it's simply not worth the risk. There are people in our camp that are dealing w/ the elderly daily. And I refuse to be a Catalyst or contributing factor to something bad happening to people I care about...

"Anyways... I'm alive, guys! Thank you to my friends for the concern; the texts, the ones that have dropped off meals for me, and checked in on me... you know who you are! And I appreciate it. I'm sorry I'm bad at responding to everybody; been trying to rest as much as I can.

"I'll keep you all in the loop; more details on the show coming up soon! Even though I'm sittin' this one out: I'd appreciate all of your support now more than ever! Please, and thank you"