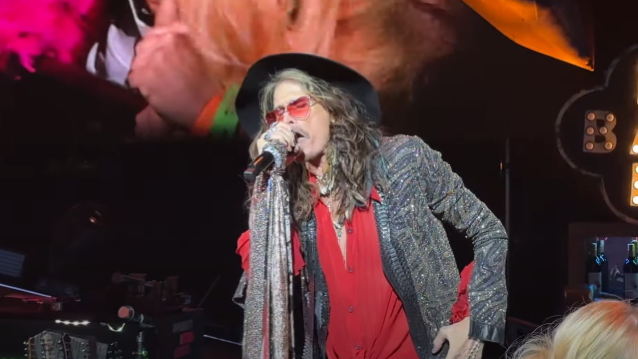 AEROSMITH was forced to cancel its concert Friday night (December 2) at Dolby Live at Park MGM in Las Vegas, Nevada due to an illness suffered by singer Steven Tyler.

A statement from the band shared on social media about two hours before showtime read: " It is with great disappointment that we are forced to cancel tonight's show in Las Vegas due to Steven feeling unwell and unable to perform. He is expected to make a full recovery for Monday night's Las Vegas show.

"We sincerely apologize for the last minute notice.

"Tickets purchased through Ticketmaster.com will be automatically refunded. All other refunds will be available at point of purchase."

AEROSMITH is scheduled to end its "Deuces Are Wild" Vegas residency after performances on Thursday, December 8 and Sunday, December 11.

In June, AEROSMITH canceled shows as Tyler had entered a treatment program after relapsing on pain medication following foot surgery.

Leading up to the latest run of shows, AEROSMITH played Boston's Fenway Park to celebrate its 50th anniversary.

Awesome. Planned a whole trip around this show. Showed up the the venue and it’s cancelled. Do better #Aerosmithpic.twitter.com/eisuSUVe2N

We flew across country for this show. Spent thousands $$$ beyond ticket cost. Is Aerosmith going to pay to fly us back out? I wish Steven a quick recovery and sorry he's ill but that's cost us way more than ticket cost.