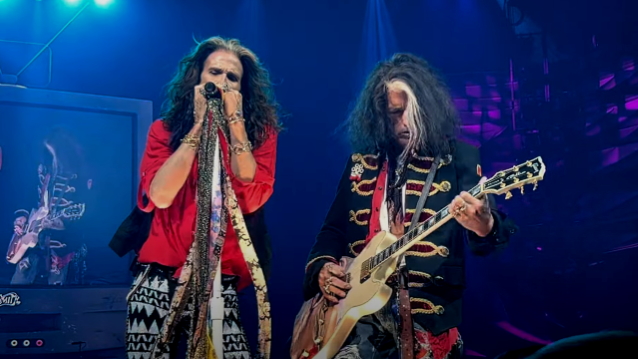 AEROSMITH has canceled its concert Monday (December 5) in Las Vegas due to singer Steven Tyler continuing to recover from an undisclosed illness. The legendary rockers previously called off their show on Friday (December 2) for the same reason.

"Unfortunately tomorrow's show, Monday December 5th, in Las Vegas has to be cancelled," the band wrote on social media. "We sincerely apologize."

Tyler said: 'On the advice of my doctor, I'm taking more time to rest…

"There is nowhere we'd rather be than on stage surrounded by the greatest fans in the world.'

Tickets purchased through Ticketmaster will automatically be refunded, with all other refunds available at point of purchase.

AEROSMITH is scheduled to end its "Deuces Are Wild" Vegas residency after performances on Thursday, December 8 and Sunday, December 11.

In June, AEROSMITH canceled shows as Tyler had entered a treatment program after relapsing on pain medication following foot surgery.

"As many of you know, our beloved brother Steven has worked on his sobriety for many years," the band's joint statement read in May.

"After foot surgery to prepare for the stage and the necessity of pain management during the process, he has recently relapsed and voluntarily entered a treatment program to concentrate on his health and recovery."

By July, Tyler was released from his latest rehab stint and was reportedly doing "amazingly well."

Leading up to the latest run of shows, AEROSMITH played Boston's Fenway Park to celebrate its 50th anniversary.