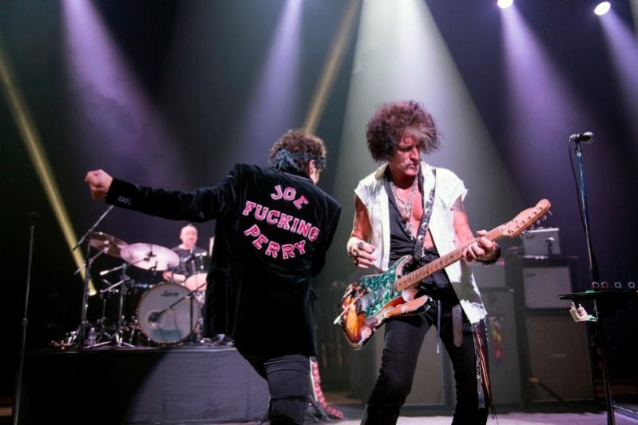 Joe Perry — legendary guitarist, co-founding member, principal songwriter and co-producer of AEROSMITH — has just announced a new single, video and tour dates with his AEROSMITH bandmate Brad Whitford and Gary Cherone of EXTREME. The music video for "Quake" is available below.

"Quake" featuring Cherone is being released today (Friday, November 9). The hard-charging track with Perry's killer riffs and Cherone's gutsy vocals is from soon-to-be-released vinyl-only version of Perry's "Sweetzerland Manifesto" (Roman Records) and was debuted live earlier this year (January 16) when Cherone joined Perry at the latter's two-hour plus set at The Roxy Theatre in Los Angeles, California. The "Quake" video features Perry — the essence of cool — alone with his guitar and amp, firing up the song alongside the lyrics and a super-hip dancing couple who embody the tune's freewheeling rock and roll spirit. It was directed by Joe's son Roman Perry.

Perry and his band will perform the song live on his upcoming headlining dates, which kick off November 30 in Iowa and include stops in New York, Detroit, Philadelphia and more before wrapping up with three Los Angeles-area shows. These performances follow gigs in April where Perry debuted his new touring band featuring Whitford and Cherone taking on lead vocals.

Along with choice cuts from his catalog of solo records, Joe will be performing rarely played AEROSMITH classics from the band's early records, including "Toys In The Attic", "Get Your Wings" and "Rocks", among others.