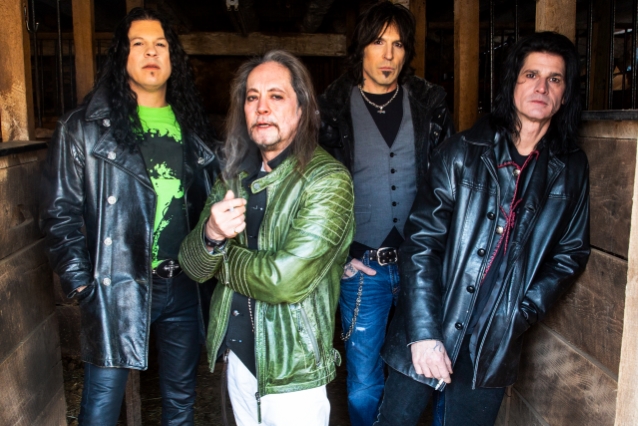 RED DRAGON CARTEL, the band led by former OZZY OSBOURNE and BADLANDS guitarist Jake E. Lee, will embark on a North American tour in February. The trek will kick off February 23 in Reno, Nevada and wrap on April 2 in Queens, New York.

RED DRAGON CARTEL's new album was recorded at Esposito's Obscenic Arts studio in Dillsburg, Pennsylvania and was reportedly mixed by legendary producer Max Norman, who has previously worked with OZZY OSBOURNE, MEGADETH, SAVATAGE and LOUDNESS, among others.

The official music video for "Havana" can be seen below.

"I chose 'Havana' as the first song to be released from the new album for a few reasons," Lee told Guitar World. "First off, it begins with a lone guitar playing the riff, promoting the idea that this is a guitar-heavy record. The song's production is about as straightforward and basic as it gets on this album and I wanted it to be apparent that, overall, it's more of an old school approach, as opposed to its predecessor [RED DRAGON CARTEL's self titled, 2014 debut album.] And, it's just a cool riff I couldn't wait to share with anyone interested in what I'm doing!"

Issued in January 2014, RED DRAGON CARTEL's debut CD sold around 5,000 copies in the United States in its first week of release to debut at position No. 69 on The Billboard 200 chart.