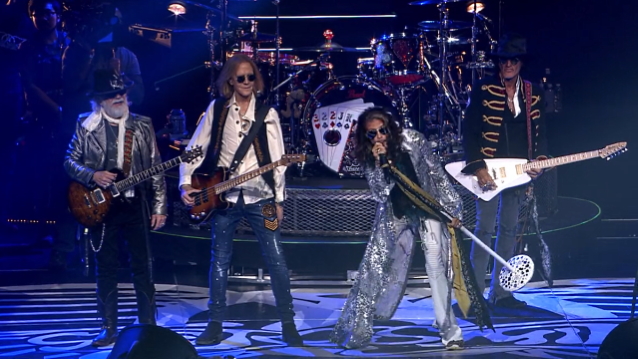 Live Nation Las Vegas residency artists AEROSMITH, Shania Twain and Christina Aguilera are starring in the ad for Las Vegas' new slogan, "What Happens Here, Only Happens Here," which continues to reinforce the legendary brand's status as the paramount purveyor of adult freedom. The new campaign launched during the 62nd Grammy Awards, making Las Vegas the first destination to ever place a 60-second ad during the international broadcast and the first to debut the campaign with an emoji prompted by the campaign hashtag #OnlyVegas on Twitter.

Las Vegas tapped into its roster of star-studded resident performers to showcase the destination in a way that Only Vegas can. AEROSMITH filmed their part during one of their "Deuces Are Wild" residency dates at Park Theater at Park MGM, while Christina Aguilera filmed her part on stage at Zappos Theater at Planet Hollywood Resort & Casino, where she performs her residency, "The Xperience". Shania Twain, who also performs her "Let's Go!" residency at Zappos Theater at Planet Hollywood Resort & Casino, was filmed riding a horse through Fremont Street Experience.

"Las Vegas stages have been graced for decades by the greatest legends of all time and it's a privilege to be invited to join a community of such a diverse live performance history," said Shania. "There is no greater place on earth to perform my music."

The ad was filmed in Las Vegas and is airing on major national and network channels.

AEROSMITH recently extended its Las Vegas residency with 15 more dates in early 2020 due to "extraordinary demand."

AEROSMITH guitarist Joe Perry told "The Eddie Trunk Podcast" about the "Deuces Are Wild" shows: "We really didn't know what to expect when we came in here [to Vegas]. We were talking to different people who have done it. I know that rock bands have come in and done two or three weeks, a month maybe, and what we saw was most bands would just kind of strip down their regular live show, bring in a little bit more production. And then we also saw… We looked at a lot of different shows — everything from 'Love' to David Copperfield to every other choice of acts on the [Las Vegas] Strip. And we decided that if we were gonna do this, we were gonna make it be not just if you wanna see AEROSMITH, but if you wanna see a rock and roll band and have that kind of music. It's like if you wanna go to see the 'Love' show and see THE BEATLES stuff taken apart and put together in a really amazing way, you go to that. If you wanna see magic, you go to see David Copperfield. If you wanna go to a Cirque Du Soleil show, there's a number of 'em you can go to see. So we wanted it to be a little more than just for AEROSMITH fans. We wanted to have it so that even if you just had heard of us, maybe you'd come and you'd be entertained"