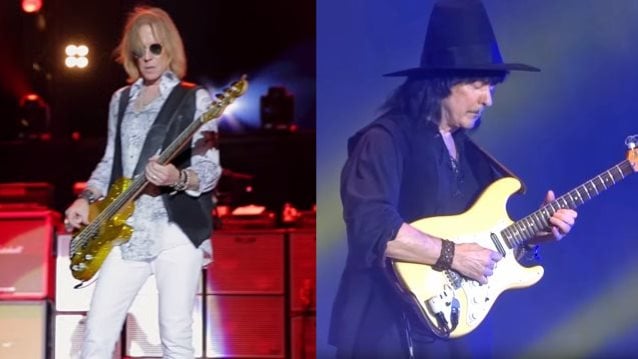 The bassist is on the road with THIN LIZZY as part of a tour to commemorate the 30th anniversary of the death of the band's frontman Phil Lynott and to celebrate 40 years since the release of the "Jailbreak" album. The first two shows of the tour were festival dates in Germany where THIN LIZZY went on before RAINBOW.

Hamilton told AEROSMITH drummer Joey Kramer on WZLX: "Right before [RAINBOW] went on, they booted everyone off the stage. They had to watch from the side. And then they put up this tape across the walkway, like 'do not cross' red-and-white striped tape."

Hamilton added: "Everybody's just kind of standing there, staring at them, like , 'Oh my God. Who's ever seen a band do that?' But he really did not want anybody on the stage while he was playing."

Asked how Blackmore looked, Hamilton responded, "pudgy," and added: "He was playing lead. It sort of sounded, just like, right off the record, and not in a real passionate way. A little flat."