AEROSMITH's Joey Kramer finally unveiled his Pearl drum kit this week as the band kicked off the first dates of the "Let Rock Rule" world tour. For the remainder of AEROSMITH's 2014 touring cycle, Joey will be relying on the proven tones of Pearl's Masters MCX Series shells, with a jaw-dropping custom lacquer that perfectly complements the drum's beautiful tones.

AEROSMITH was foced to cancel the May 14 concert at the İstanbul Technical University (İTÜ) Stadium in İstanbul after Turkey declared a three-day mourning for the victims of Tuesday's coal mine disaster in Soma. 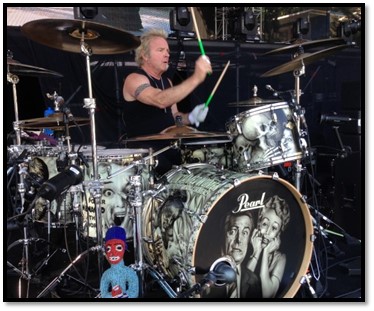