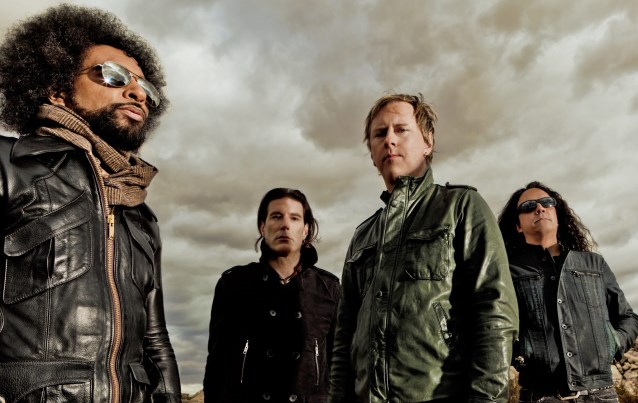 ALICE IN CHAINS has once again tapped director Roboshobo (a.k.a. Robert Schober; METALLICA, MASTODON, GREEN DAY) to helm the video for the band's song "Phantom Limb". The group previously worked with Roboshobo on the "Hollow" and "Stone" clips. All three songs appear on ALICE IN CHAINS' fifth studio album, "The Devil Put Dinosaurs Here", which was released in May 2013.

In a November 2013 interview with Drowned In Sound, ALICE IN CHAINS singer William DuVall stated about "Phantom Limb": "'Phantom Limb' was a musical demo that was sent to me, which I immediately reacted to, and within a day or so had written all the words for it. Within the first few minutes, I had a couple of lines for it, and over the next day or so, I refined it. All that stuff happened pretty quickly. Basically within 48 hours of them sending the musical demo, I sent them back a fully formed vocal track, pretty much what you here on the record. The actual recording was reproducing what I did at home. It never had a solo, so at one point where we were at Hanson, deep into recording, Cantrell asked me, 'Do you wanna play the solo on that, 'Cause I don't have anything.'"

ALICE IN CHAINS was last in the Top Two with its self-titled 1995 set, which debuted at No. 1 on that year's November 25 chart, according to Billboard.com. It would be their final studio release with singer Layne Staley, who died in 2002.

"The Devil Put Dinosaurs Here" is ALICE IN CHAINS' second album with William DuVall on vocals.

Asked how he would characterize his guitar role in ALICE IN CHAINS, DuVall told GuitarPlayer.com in a 2013 interview: "It's everything from writing riffs to providing counterpoint to what [Jerry] Cantrell is doing to doubling what he's doing to playing solos. I do the solo on 'Phantom Limb' on this new album. So, it's really everything that you would expect from a two-guitar band. My being in the group also gives the band another guitar player who can write things, and we've also turned into a bit more of a jamming outfit when we rehearse. I'm told they didn't really do a whole lot of that before. But that's sort of where I come from: a jamming background. I'll start up something and see where it goes in rehearsal. That's a different way of interacting, which is cool."