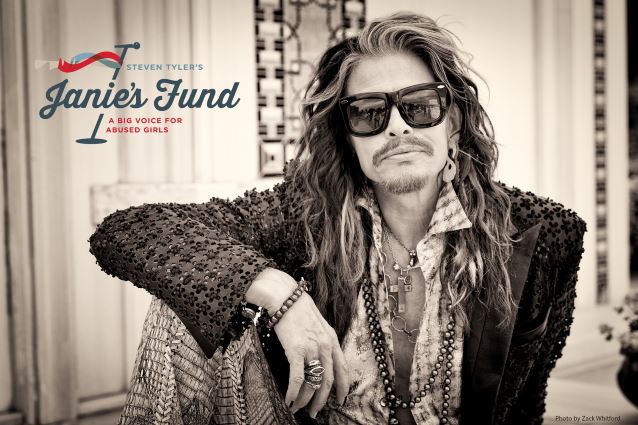 AEROSMITH singer Steven Tyler, an iconic rock star forever known for his big voice, is now opening his big heart. Tyler is honored to announce today the launch of his new signature philanthropic initiative: Janie's Fund, in partnership with Youth Villages. The fund will bring hope and healing to girls who have endured neglect and abuse. It will also raise much-needed money and awareness to address, through proven programs, the trauma of sexual abuse in children and to expand these services to aid even more girls.

Tyler's hit song "Janie's Got a Gun" was born out of his growing desire to speak up for the victims of child abuse. Launching Janie's Fund has been a longtime dream of Tyler's, and he is passionate about the positive results that this fund will create for young people.

"As a father and grandfather, I want to focus my energy on things that really matter and leave behind something else in this crazy world along with my music. I am starting Janie's Fund to give a voice to the millions of victims who haven't had one and encourage everyone to join me on this mission," said Tyler.

Janie's Fund kicks off with a historic 54 days of impact, running from November 8, the 26th anniversary of the release of "Janie's Got a Gun", through the end of the year. Anyone who signs up to support during these 54 days becomes a Founding Member of Janie's Fund and receives limited-edition merchandise from Tyler. Fans can visit Prizeo.com/StevenTyler to become Founding Members and register for a chance to win a once-in-a-lifetime experience with Tyler through Prizeo.

The "Ultimate VIP Rock Experience with Steven Tyler" prize includes walking the red carpet and VIP backstage passes to an upcoming performance, as well as hanging with Tyler and his entourage backstage before the show. In addition, other priceless experiences are available, and all Founding Members will be memorialized in perpetuity on JaniesFund.org.

The excitement surrounding the Janie's Fund announcement began last week, when other artists began to receive large custom mystery crates: Bono, Miley Cyrus, Sir Elton John, Jennifer Lopez, Ryan Seacrest, Britney Spears, Howard Stern, Carrie Underwood and more received exact replicas of Tyler's most famous trademark white, jewel-encrusted mic and mic stand, (courtesy of Atlas Sound and Shure),complete with hand sewn signature scarves and a handwritten note from Tyler saying, "I may have a big mouth, but now I need your voice." There will be additional mystery crates being revealed from other A-list artists in the coming weeks.

Tyler, the iconic songwriter and voice of the best-selling American rock band AEROSMITH, has been an avid philanthropist his entire life, performing regularly for social causes, including the Nobel Peace Prize Concert in Oslo, Norway.