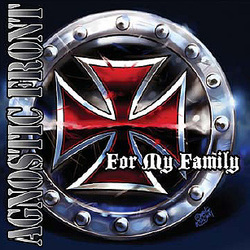 New York hardcore legends AGNOSTIC FRONT have posted two new songs — "Dead to Me" and "For My Family" — on their MySpace page. The tracks come off the band's upcoming CD, "Warriors", due in North America on November 6 via Nuclear Blast Records.

"Warriors" was produced by MADBALL/HAZEN STREET frontman Freddy Cricien, who also happens to be AF vocalist Roger Miret's younger brother. The engineering duties were handled by Zeuss from Planet Z in Hadley, Massachusetts. Roger Miret commented: "As most of you already know, Freddy is my little brother and the frontman for the NYHC fury MADBALL! The collaboration between us is sure to make an impact worldwide!"

AGNOSTIC FRONT released a new seven-inch single, "For My Family", on Septmber 25 via Bridge Nine. The effort features the following track listing:

The first two songs will appear on "Warriors", while "Break the Chains" is a track exclusive to this single, produced by Zeuss (HATEBREED, SHADOWS FALL) and Freddie Cricien.

Check out the "For My Family" artwork at this location.