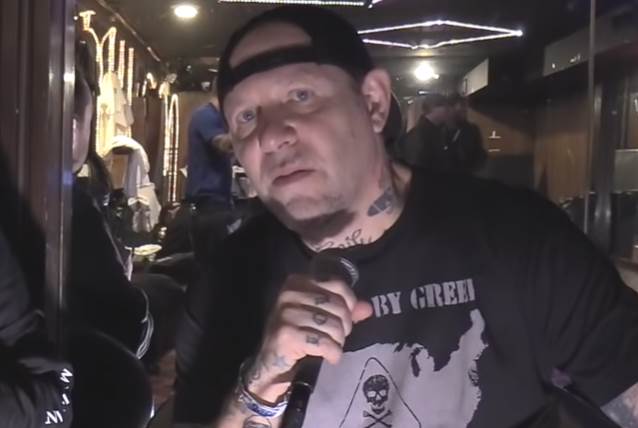 Alex Haber of Heavy New York recently conducted an interview with frontman Roger Miret of New York hardcore veterans AGNOSTIC FRONT. You can watch the entire chat below. A few excerpts follow below (transcribed by BLABBERMOUTH.NET).

On the current state of New York hardcore versus the 1980s:

Roger: "It's different; it's just not my party, basically. It's different, but I'm glad I lived in the very beginning of it in the '80s. We didn't know what was happening. We didn't know we were creating a scene or anything like that. It's different enough, but there's still a connection there that there's a lot of mad respect for the old-school, of course. There's that connection, that longevity that we strive for in our music and our message, which is really cool. It's just different. There's a lot of differences, but a lot of similarities. I can't just pinpoint each and every one of them, but it is what it is. I like to explain it as simple as this: We had our party in the early 1980s, but's a different party, but I'm always welcome, so it's all good. The connection is there."

On what makes a band "hardcore" for him:

Roger: "To me, lyrically is the most important thing of all hardcore. But, you know, everything started to get separated which I kind of didn't like. To me, [AGNOSTIC FRONT debut] 'Victim In Pain', to me, was a punk record and that was considered 'hardcore punk.' There was a reason why the term 'hardcore' started coming around because a lot of the older punk bands started playing new wave and stuff like that. Just to kind of explain what kind of a band it was, it was hardcore punk, but not a new wave punk, you get it? That's when the terms got a little bit loose and they started disconnecting stuff, especially after 'Victim In Pain', people started saying, 'This is a hardcore band.' In terms, meaning it's 'hardcore punk.' To me, lyrically, it's the most important thing of all. Musically, comes second, if you ask me, but a lot of these bands, their musical talent is beyond expectation, which is awesome and pretty fucking cool. When hardcore first started, if you listen to a lot of the very early stuff, it was very primitive. Music wasn't a thing, it was always more of the message."

On whether he needs to hear music before writing lyrics:

Roger: "Believe it or not, there's only a few songs that have been written around lyrics that I came up with. Most of the time, I have to feel the music, like if they're writing something and if I'm liking it, I'll let them know, and if I don't like it, it's out. I got to vibe it and I'll hear something. I'll listen to the song and I'll hear a sentence and it will tell me something and I'll go from that sentence out."

On whether newer hardcore bands have inspired him:

Roger: "Of course they have. For me to sit here and tell you no, it's ludicrous. A lot of these bands, Jamey Jasta [HATEBREED], CANDIRIA, all of these bands we've toured with, we've played with. Subconsciously, you don't know they're influencing you at the same time. It's just like that's how the whole metal and punk thing crossed over. A lot of those guys started coming to our shows and then we started going to their shows and we just blended. Something naturally happened. I go and watch these bands and I'm definitely influenced. I'll take something back home with me whether deliberately or unconsciously or subconsciously. Something will stick in my head that eventually might come around a little bit later. I think everybody influences everybody. I'm not going to sit here and say 'No, we have no influences. We just do our thing.' That's just ridiculous."

On the element of "brotherhood" within the hardcore scene:

Roger: "What's kept us relevant and kept our longevity and stuff is that we are connected with the past and the present. We're one of those bands that still supports hardcore full-on, old-school, new-school. We go out with bands of all kinds. We're not stuck in a certain time era or nothing like that. I think that's when you get lost."

On whether AGNOSTIC FRONT has started work on the follow-up to 2015's "The American Dream Died":

Roger: "Absolutely. We started pre-production on a couple of new songs. They're coming out pretty badass; I'm happy with them because a lot of stuff is happening in the AGNOSTIC FRONT camp. I just released my book, 'My Riot [Agnostic Front, Grit, Guts & Glory]', that's been a big thing and I did a tour around it, which is awesome. Now we have that film, 'The Godfathers Of Hardcore', which is going to be another level. There's a lot of positive, good stuff coming out, but not just AGNOSTIC FRONT, but New York hardcore, but hardcore worldwide. All this stuff is positive for our message, people that follow us, it's good for hardcore, period."

AGNOSTIC FRONT's eleventh album, "The American Dream Died", was released in 2015. The disc, which was produced by MADBALL singer Freddy Cricien and engineered, mixed and mastered by Paul Miner (H2O, TERROR),features guest appearances by Cricien, Toby Morse (H2O) and Lou Koller (SICK OF IT ALL).