Rock City Music Company, earMUSIC, WCSX and Alice Cooper have teamed up to bring "Detroit Stories" to life with an exclusive in-store signing set for 4 p.m. on September 23. Fans will have the chance to meet Detroit's own Rock And Roll Hall Of Famer and have their copy of "Detroit Stories" signed in person. This is the first time since 1999 that Cooper has participated in an event of this kind in the metro Detroit area.

"Detroit Stories" celebrates the rock icon's former hometown and his hard-rock roots. Most of the album was recorded locally in Royal Oak at Rustbelt Studios, and features a wide array of noted Detroit musicians, including bassist Paul Randolph, guitarist Garret Bielaniec and legendary drummer Johnny (Bee) Badanjek (MITCH RYDER, ROCKETS). Shortly after its February 2021 release, "Detroit Stories" shot to the No. 1 spot on Billboard's Top Albums chart, Cooper's first album to do so.

"I'm excited to do an album signing in Detroit again," said Alice. "Especially for the 'Detroit Stories' album, and for all the Detroit fans. Detroit still feels like home in so many ways. And Rock City Music is the right place to do it. We recorded nearly all of it in Royal Oak, and now we can celebrate it in Livonia, followed by the concert two days later up at Pine Knob. I know it's DTE Energy now but it will always be Pine Knob to us."

Rock City Music Company is a full-service music center featuring a wide selection of the coolest guitars, amps and drums, a killer selection of vinyl records, t-shirts, posters, accessories, novelty items and more. Private lesson rooms, an on-site repair shop, and a pinball corner round out this mecca of music located in the heart of the motor city.

Since opening in 2015, Rock City Music Company has welcomed some of rock music's biggest stars to its stage, including Geddy Lee of RUSH, Steve Gorman of THE BLACK CROWES and Glenn Hughes of DEEP PURPLE.

Please note: Alice will only be signing copies of "Detroit Stories" and a ticket must be purchased to participate in the signing event. Due to time constraints, there will be no photos permitted with Alice.

Tickets are available to purchase at link textwww.rockcitymusicco.com via Eventbrite.

Alice will sign up to two copies of "Detroit Stories". One (1) additional copy per person can be purchased when securing your admission ticket. Fans that have previously purchased "Detroit Stories" are welcomed to bring their copy to be signed in addition to the copy provided with their original paid ticket. 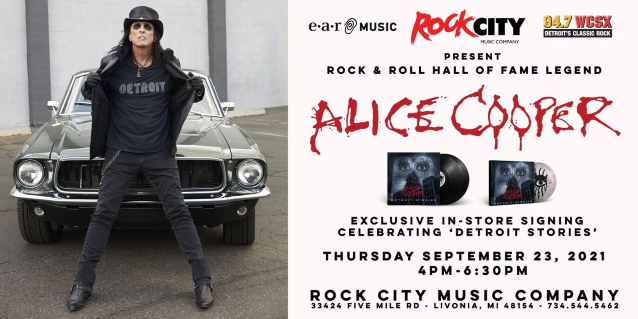