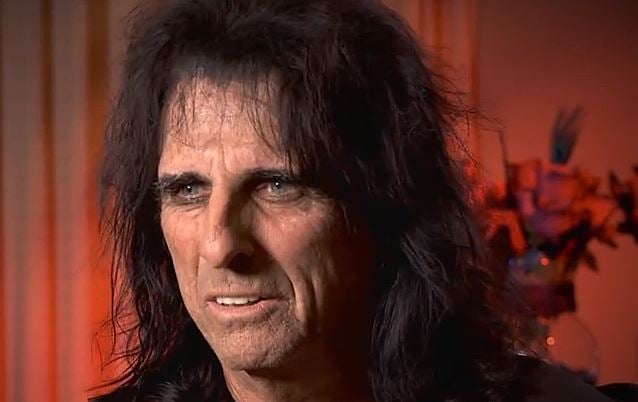 On September 26, Chad Tyson of the 98.7 The Gater radio station in West Palm Beach, Florida conducted an interview with legendary rocker Alice Cooper. You can now listen to the chat below.

Cooper has just completed work on a covers album featuring songs that were originally written and recorded by THE DOORS, Jimi Hendrix, John Lennon and THE WHO, members of the so-called "Hollywood vampires" of the early and mid-'70s. A spring 2014 release is expected.

"We're still adding on certain people; we have a list of people that we want to get and a lot of times it's scheduled," Alice said. "In a situation like this, you have certain friends you want to put on the record and their availability is really what it is… y'know, finding where they are, what they want to play and when they want to play."

Pushed for names of the special guests, Alice replied, "I'm just saying…probably the 'usual suspects.' Put it that way."

"We're really happy, all of us, everyone involved in the covers because it's pretty much what we wanted to do," Cooper told RollingStone.com earlier in the year. "We specified a certain time period and said, 'Let's stay within that. Let's not move it around too much.' We don't want to be doing cover songs from the 80s and 90s when the Hollywood vampires kind of thing was more '73, '74, '75."

Back in March, Cooper said about the upcoming CD: "We do a thing in our show, which is a tribute to Hollywood Vampires, my drinking club. And it was Keith Moon, John Lennon, Harry Nilsson, Micky Dolenz — a very eclectic bunch of drunks. Half of them are dead, so we do four songs in the show in tribute to them. We do 'Break On Through', 'Revolution', 'My Generation' and Jimi Hendrix's 'Foxey Lady'. I just kind of said, 'We've never done a covers album, let's think about that.'"

Asked what some of the wish-list songs are, Cooper said: "I would keep it right to about '73, '74. I don't want to just go anywhere. I want to keep it right in that sort of drunk era, so it's specific. I would say 'Break On Through', that's a really good rock track there. The other ones, think of it — Harry Nilsson, there's a lot of good stuff there that could be rocked out. I think of songs as being clay. Take a song like 'Jump Into the Fire' and take that to a harder level, and that'll work."