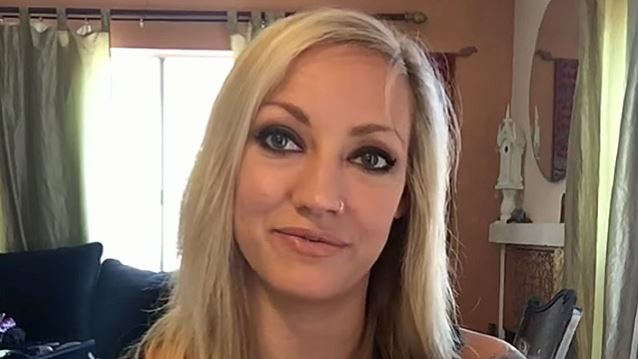 ALICE COOPER Guitarist NITA STRAUSS: I Am 'Banned' From Looking At Comments On BLABBERMOUTH.NET

Nita Strauss, the Los Angeles-based guitar shredder for the ALICE COOPER band, was interviewed for a recent episode of the "Music Mania" podcast. You can now listen to the chat below.

Speaking about the negative comments that are posted about her on various social media sites and sites like BLABBERMOUTH.NET, Nita said: "People are crazy. People say some very crazy stuff. I'm really grateful to have a support team on my side to help me deal with the craziness of everything."

Strauss added: "I'm on a strict no-comment diet, which means I can't look at any comments on YouTube or Blabbermouth. I'm banned from looking at comments on anything. The only thing I look at comments on is my own posts. So that saves my sanity a lot. Because it's hard… I don't pull the 'girl card' out a lot, but as a female in heavy metal, it's hard to be incessantly picked on. So staying away from it has been really healthy for me. I know that there's a lot of articles about me on web sites like Blabbermouth and Lambgoat, and Classic Rock will post stuff, and I know that there's always gonna be [negative] comments, and the same thing on YouTube videos. And I just think it's counterproductive [for me to read the negative comments]. Me knowing that some guy from Nebraska thinks I suck is not gonna help my day. And it's certainly not gonna make me any better of a guitar player."