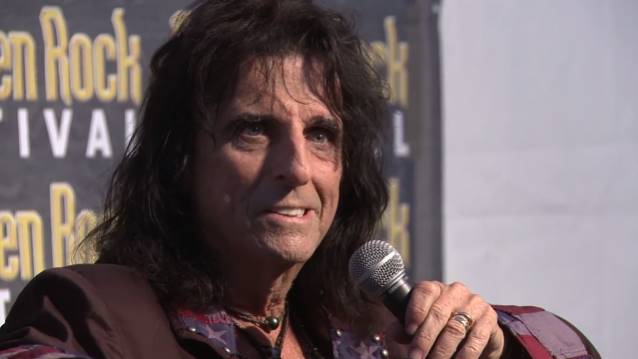 ALICE COOPER Is Now A Grandfather

According to Fox10Phoenix.com, legendary rocker Alice Cooper became a grandfather a couple of months ago when his son Dash and his wife had twin boys, Riot and Falcon.

"We just decided that we're going to write down thirty boy names each, we're gonna come back together and decide on one. Falcon was the only name on the list that we both agreed on," said Dash Cooper. As for Riot, "I went to a concert, and I saw the word riot and it just clicked," said Alice's wife, Sheryl Cooper.

Fox10Phoenix.com asked Alice what he expects when the world hears he is now a grandfather. "Don't believe that I'm not gonna get ribbed like you know, but then you realize almost every guy that I already know out there is already a grandfather... Mick Jagger is a great-grandfather, so he's way ahead of all of us as he always is," said Alice.

As previously reported, Alice's full concert performance at ACL Live in Austin, Texas will be available on pay-per-view through cable TV as well as online. Brought by Live Alliance, this is also a bonus for fans already planning on attending the Austin gig.

After serving as the opening act for the 2014 installment of MÖTLEY CRÜE's "The Final Tour", Cooper will once again head out on the road with the Los Angeles rockers beginning on July 22 in Eugene, Oregon and ending on September 4 in New Orleans, Louisiana. Cooper told ABC News Radio that there were no issues when the two acts toured last year. "There was never any hassle," he said. "You know, you get two bands together and there's gonna be an ego clash. Never happened. Both crews worked together. All the bands respected each other. So there was never one day where there was a problem."