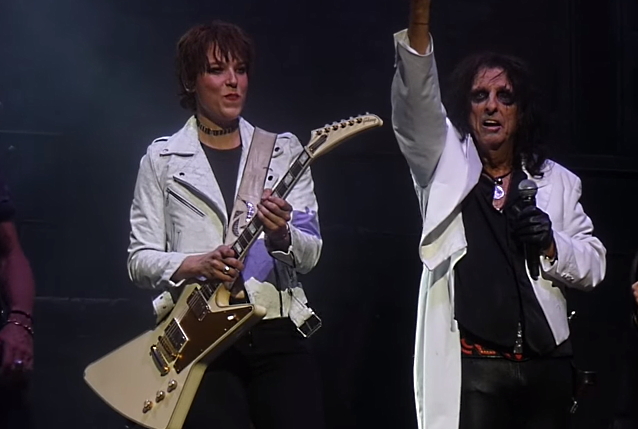 Alice Cooper, HALESTORM singer Lzzy Hale and BLACK STONE CHERRY frontman Chris Robertson are among the musicians who will appear on the Planet Rock All Stars charity single. They will be featured on a "rocked up" cover of John Farnham's 1986 hit "You're The Voice", which will be released digitally on December 6. A limited-edition CD version costing £5 will be available to buy throughout the 2000-mile Road 2 Rockstock 2 cycle trek.

All proceeds from the single, which is being produced by WAYWARD SONS' Toby Jepson and also features members of DEF LEPPARD, THE CADILLAC THREE, THE TEMPERANCE MOVEMENT and THE DARKNESS, will go directly to mental health charity Mind.

Road 2 Rockstock 2 will see Planet Rock's Wyatt covering 2,000 miles in two weeks, visiting landmarks and famous music venues on the way, while averaging 135 miles a day for 15 consecutive days. He hopes to raise more than £75,000 for Mind.

Last year, Lzzy spoke to Ireland's Overdrive about her decision to launch a mental health awareness campaign in the wake of the tragic death of HUNTRESS frontwoman Jill Janus. Shortly after Jill's passing, Lzzy posted a picture on social media of herself raising the horns, and encouraged others who had suffered from mental illness to do the same and tag their posts with #RaiseYourHorns. In the days that followed, thousands of rock fans from across the world shared the hashtag and their stories.

"I feel that I inadvertently opened a door, if you like," Lzzy said. "This came right on the heels after the passing of Jill, and I just wanted to do something for our community — music, bands, management, crew, etc. — that I know who talk to me about their own struggles. A lot of people started talking to me about it and I found it so inspiring and now I'm able to talk about my own mental stability, which is a very good feeling and it helps a lot."

She continued: "Mental illness runs in our family, and, in fact, Arejay [Hale, HALESTORM drummer and Lzzy's brother] and I have talked a lot about this, and he started going to therapy just for the peace of mind of being able to talk to someone outside of this business, outside of our circle, someone totally independent that he can open up to. He's, like, 'Sis, you know I'm going to talk to someone and I don't even have the volume of people crying on my shoulder like what you have.' I've always been a kind of mediator with people and tend to carry a lot of emotional connections with other people. It's just so important to talk about your feelings and not hide them away."

In her original social media post, Hale encouraged her fans to "keep searching for your lifeline" and added: "Asking for help doesn't mean you're broken. And if you don't know how to ask for help, that's okay too. Those of us who have a shoulder will let you lean on it! We are all in this life together. For those of you with the ability to lend a hand or and ear, DO IT! We have a responsibility to help each other, 'cuz everything we say, do and touch affects the whole race. We are all connected."