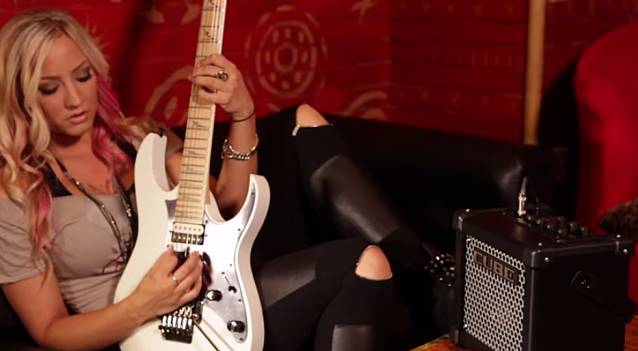 Following the April premiere of "Super Duper Alice Cooper" at the Tribeca Film Festival, and the subsequent release of the documentary on DVD, Blu-ray, deluxe editions, and digital formats this month via Eagle Rock Entertainment, rock's greatest showman Alice Cooper heads out on a lengthy North American tour. The summer trek starts with three shows in Michigan June 26-28 before Cooper joins MÖTLEY CRÜE's final "All Bad Things Must Come To An End" tour as a very special guest on July 2, running through late November. The tour marks the debut of Alice's new guitarist Nita Strauss (pictured),who was recently ranked #1 on Guitar World's list of "10 Female Guitar Players You Should Know." She takes the place of Orianthi, who has toured with Alice for the past few years.

Nita, who has made her name in bands, including THE IRON MAIDENS and FEMME FATALE, joins Alice's band's three-guitar attack, which also features guitarists Ryan Roxie and Tommy Henriksen, plus longtime bassist Chuck Garric and drummer Glen Sobel.

Alice Cooper has completed work on a covers album featuring songs that were originally written and recorded by THE DOORS, Jimi Hendrix, John Lennon and THE WHO, members of the so-called "Hollywood vampires" of the early and mid-'70s. The disc, which is expected out in early 2015, will also include "four or five new songs," which the legendary rocker wrote specifically for the new CD. He told VH1 Radio Network's Dave Basner: "We decided that in order to set up the 'Hollywood Vampires' thing, you had to kind of tell the story, and you had to write songs that were going to set up the story, and then get into the covers. So we had fun sitting there writing these new songs around it. So it's going to be quite a package, this thing is."

Regarding how the idea for the covers album came about, Cooper told Yahoo! Music: "Producer Bob Ezrin said to me, 'You know, you're a rock 'n' roll singer. It would be great to hear you doing someone else's material once in a while. And then we thought, 'Well, we can't just do a covers album where we bounce around from song to song.' So Bob came up with the idea, 'Let’s concentrate it on all the guys that you drank with in L.A., the Hollywood Vampires, the ones that are all dead.' It’s really an ode to all my dead, drunk friends: Jim Morrison, Jimi Hendrix, some of the SMALL FACES, Harry Nilsson, T. REX. These were all of my drinking buddies. I like the title 'All My Dead Drunk Friends'. It's just offensive enough to work, but all those guys would have totally got it. They had the same sense of humor. If you told them you were going to do an album after they were gone called 'All My Dead Drunk Friends,' they would have died laughing."