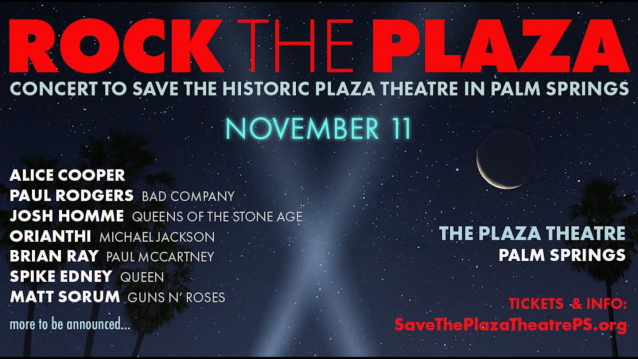 The historic Plaza Theatre in downtown Palm Springs announced that there will be a fundraising concert featuring The Palm Springs All Stars, a stellar lineup of world-class musicians and their rockstar friends. "Rock The Plaza" is a major concert to be performed at the Plaza Theatre in Palm Springs. The concert will take place on Friday, November 11 at 8 p.m. Tickets and additional information may be found at savetheplazatheatreps.org.

"We are blown away by the incredible talent that has stepped forward and joined forces to offer this spectacular benefit show," said J.R. Roberts, Palm Springs Plaza Theatre Foundation president. "Never before has such a world-class group of musicians freely donated their time and resources to help us restore the historic Plaza Theatre. We are indebted to this talented group of performers and to the event sponsors, Margaritaville Resort, SiriusXM radio, and The Shag Store."

When Edney heard that a committee had been formed to raise money to restore the Plaza Theatre, he was overjoyed that the jewel in Palm Springs crown was being saved after remaining dark for so many years. He contacted committee chairman Roberts and offered to produce a celebrity concert to raise funds for the Save The Plaza Theatre restoration project. This prompted the formation of The Palm Springs All-Stars.

"During my 38-year career as QUEEN's keyboardist and touring musical director, I've had the privilege of working with some of the biggest names in music," said Edney. "Over the years I've been fortunate enough to have crossed musical paths with Paul McCartney's guitarist Brian Ray and drummer Matt Sorum, who is well-known for his key roles in GUNS N' ROSES, VELVET REVOLVER and THE CULT. When I realized that they also resided in Palm Springs, I reached out to them and we formed this collaboration with the sole intent of helping to restore this beautiful and historic theatre."

The Palm Springs All-Stars are a collection of talented internationally known musicians, concerned citizens, and lovers of the city and its musical heritage. The group is a fluid and ever-expanding union of all those who can bring their talent to the table, in a combined effort to save the Plaza Theatre.

"The wealth of locally based talent, coupled with friends from afar, will ensure that the inaugural performance of The Palm Springs All-Stars at 'Rock The Plaza' will be an unprecedented stellar event, featuring music, mirth, and mayhem," Edney continued. "It will be a night to remember, and it is for a great cause."

To attend the "Rock The Plaza" concert, participants may choose from a variety of ticket levels, each offering their own amenities. Each level includes one ticket for the chance to win the Rock the Plaza Celebrity Prize Draw. The prize is an official, limited-edition "Rock The Plaza" art poster, signed by the artist Glen Wexler and The Palm Springs All-Stars and all special guests.

Tickets start at $175. Sponsorship packages are available from $3,500 to $200,000. All higher-tier ticket and sponsorship packages include a significant Plaza Theatre donation element. This limited number of special packages not only include VIP pre- and post- concert receptions, but they also come with Plaza Theatre naming opportunities, to give the buyer permanent recognition for their generous support.

Various musicians have donated items or experiences for a special "Rock The Plaza" online auction. Auction prizes include a signed Brian May "Red Special" guitar, a signed fan Adam Lambert uses on stage during QUEEN concerts, a guitar signed by Alice Cooper, signed go-go boots from Nancy Sinatra, two VIP tickets for a Barry Manilow show in Las Vegas, including dinner and a two-night stay at the Westgate Resort, and much more. More about the auction will be announced later at savetheplazatheatreps.org.

Seminal Palm Springs architect Harry Williams designed the theatre in the Spanish Colonial Revival style. The theatre opened in 1936 with the premiere of the George Cukor film "Camille", with its legendary star Greta Garbo, who allegedly slipped into the back of the theatre after the lights went down. Garbo's co-star in the film, Robert Taylor, attended with Barbara Stanwyck.

Over the years, the theatre was the venue for memorable performances by entertainment giants Bing Crosby and Frank Sinatra. Performers Jack Benny, Bob Hope and "The Edgar Bergen And Charlie McCarthy Show" broadcast live radio shows from the Plaza, bringing national attention to Palm Springs. It also was one of the most popular movie theatres in the growing Palm Springs community and was the venue for a number of motion picture world premieres, including "My Fair Lady" and "Music Man".

In the late 1980s Sonny Bono created the Palm Springs International Film Festival at the Plaza Theatre. In 1991, a vaudeville-type revue called "The Fabulous Palm Springs Follies" launched and ran there for 23 years. The long-running show brought international exposure to the theatre and in many ways helped revitalize downtown Palm Springs.

The Plaza Theatre was declared a Class 1 Historic Site in 1991. This designation prohibits any structural changes that do not adhere to the original design. The theatre is in dire need of repair and restoration and the City of Palm Springs is committed to bringing it back to its original luster as the heart of the city.

The Plaza Theatre Foundation is a 501(c)(3) non-profit charity corporation. Contributions made to the Foundation are tax deductible to the extent allowed by law.