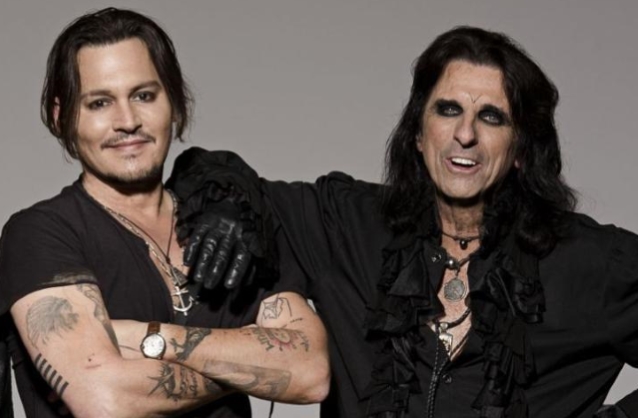 Alice Cooper has told Billboard that the upcoming second album from the HOLLYWOOD VAMPIRES — in which he is joined by AEROSMITH's Joe Perry, Johnny Depp and guitarist Tommy Henriksen — will consist mostly of originals sung by Cooper along with three covers featuring vocals by Perry and Depp.

"It's really interesting because it's not your normal hard rock," Cooper said of the Henriksen-produced effort. "It goes places I wouldn't normally go, and that's kind of what I like about it. I'm spewing his venom on this album, which is kind of good."

Cooper also stood by his bandmate Depp over a torrent of bad publicity in recent months, including widely reported allegations that he physically abused ex-wife Amber Heard — something the actor has vehemently denied.

"All the stuff you heard last year about Johnny, 99 percent was just bull," Alice said. "I've never seen him look better in my life. I've never seen him happier. I've never heard him play better, and the way the press would have it is he's a total destruction and ready to die. Totally not true."

Depp recently filed a lawsuit against his ex, seeking $50 million for allegedly defaming him with "hoax" allegations of domestic abuse.

Cooper also told Billboard that he will possibly release a new EP to coincide with his summer tour with HALESTORM. The effort will likely consist of four tracks recorded in Detroit with producer Bob Ezrin and various musicians from the area, including drummer Johnny "Bee" Badanjek. A full-length album could follow in 2020.

HOLLYWOOD VAMPIRES will embark on a seven-date U.S. West Coast tour in May. There are also plans for the band to release a live album recorded last year in Europe.