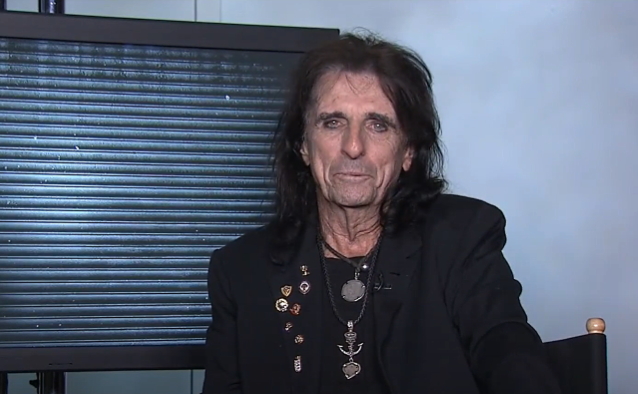 ALICE COOPER Urges Everyone To Get COVID-19 Vaccine, Says He Was 'Knocked Out' For Three Weeks After Contracting Virus

In a separate chat with "Good Day Sacramento", the 73-year-old rocker offered an update on his health, saying: "I'm fine now. I got my both shots, and everything's back to normal again. I certainly didn't have to go to the hospital or anything like that. But it did wear you out. It's not fun at all. So get your shots out there; go get your vaccinations."

Earlier in the month, Cooper told the Arizona Republic that he and his wife "were wiped out" after contracting the novel coronavirus. "I lost 15 pounds," he said. "I couldn't sleep. I couldn't eat. Now, I'm feeling pretty good. I'm feeling like I'm at least 95%."

Alice and his wife were fully vaccinated in their hometown of Phoenix, Arizona. He told SiriusXM's "Trunk Nation With Eddie Trunk" about the experience: "I hate shots. I hate needles more than anything else. And I never felt either shot; it was the most painless thing I'd ever felt in my life. And the second shot, 12 hours later, I went, 'Oh, man. This is nothing.' I got the chills for about two hours. I was under blankets for two [hours], and then it was gone. That was it.

"The funny thing about it was I was watching the people getting the shot, and I didn't even see a grimace," he added. "I didn't see even that. And I went, 'How are these people not reacting?' There was an old lady getting a shot, and see didn't even [flinch]. And I said, 'Man, am I that big of a wimp?' [Laughs]"

Alice and his wife got the COVID-19 vaccine through Team Rubicon, a nonprofit organization that pairs military veterans with first responders to help in times of need.

In March 2020, Cooper told Arizona Republic that he felt "less vulnerable" in his house than he does in a different hotel every day. "You don't know who's been there, what they've touched," he explained. "When I was in Europe, I spent all day doing Purell, washing my hands. Every time you would touch something, you'd realize 'Well, how do you know that wasn't infected?'"

As to whether he was concerned about the possibility of contracting COVID-19, Cooper told Arizona Republic at the time: "I'm not scared of this thing. ... But you've got to consider everybody. You never know what the guy next door's health problems are."