ALICE IN CHAINS has completed mixing its first new studio album in 14 years. According to an online posting by The Baldy — whose job is "to travel the world with ALICE IN CHAINS and send photos, videos and blog entries back to [the webmasters] at AliceInChains.com" — "Some amazing songs were written and recorded. From the heaviest riff-dripping gut-puncher to the most sadly beautiful song I think this band has ever recorded, I honestly believe that this album will return ALICE IN CHAINS to the top of the hard rock heap.

"So now the next few months are dedicated to things like album artwork, lining up interviews and press, shooting videos, planning tours, and figuring out whether to bury Jerry [Cantrell, guitar/vocals] and William's [DuVall, vocals] beards at sea or donate them to science.

"Hopefully these new songs will strike a chord and make a similar impact on all of you out there that were moved by this band in the first place. These songs have definitely done that with me, and frankly I'm getting pretty sick and tired of loving this stuff alone, so I can’t wait for it to be released so it'll become your favorite record of 2009 and we can discuss it at the shows."

Although there has been speculation and even doubt over whether ALICE IN CHAINS could continue without Staley, guitarist Jerry Cantrell told The Pulse of Radio that the band's approach to making music is still the same. "Everything that we ever created musically as a band, I can still stand behind it completely, and we did it because we loved it, and we spent the time to make sure it was kick-ass," he said. "And this is nothing different, you know. Of course, the dynamic has shifted and, you know, we miss Layne tremendously, but we feel that we still have something to offer, you know."

There is no official word yet on when the new ALICE IN CHAINS album will come out, although a fall release is tentatively expected.

The group began writing and recording the disc on its own last year, and intends to sign a new record deal now that the project is finished.

ALICE IN CHAINS' last full-length studio effort was a self-titled disc issued in 1995. Layne Staley died from a drug overdose in April of 2002.

Video footage of ALICE IN CHAINS' February 28, 2009 performance at the Soundwave Festival in Adelaide, Australia can be viewed below (clips uploaded by "backpackdave08").

ALICE IN CHAINS guitarist Jerry Cantrell recently spoke with Australia's Courier-Mail about the group's upcoming album, its first full-length set of new material in more than 13 years and first without lead singer Layne Staley, who died in 2002 after a long battle with drug addiction. Handling lead vocals is William DuVall, who has sung with the group ever since it reactivated in 2005. Cantrell said, "The new stuff is cool. It's pretty goddamn crushing. I've stepped up a little bit from where I was before . . . obviously, it'll be a new sound from William being there — but it sounds like an ALICE IN CHAINS record and a kick-ass one. There's everything from the darkest of dark, heavy shit to acoustic stuff. Throw all that together and that's what you'll get."

Cantrell told The Pulse of Radio when the band first got back together that they did not have a set plan to tour or make a new album. "You know, if you were looking at how to really capitalize on this experience and really make dough and make it a profitable thing, a band might, you know, would come out with a singer, have a record ready and all that," he said. "But that's not where we're coming from with this thing. We're coming from the place of 'It feels good, and we're having a good time, so we'd like people to be a part of that.'"

ALICE IN CHAINS is scheduled to play at Columbus, Ohio's Rock On The Range festival in mid-May. 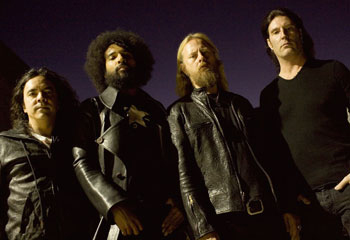