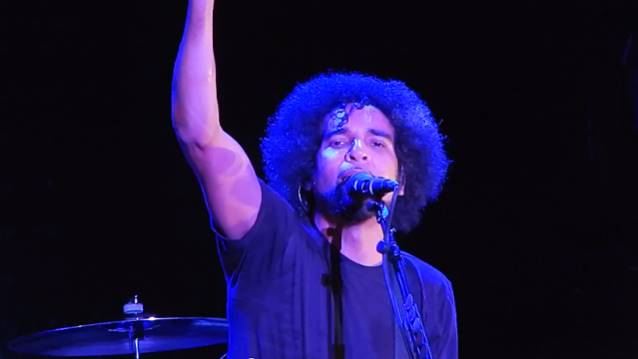 ALICE IN CHAINS vocalist William DuVall told TeamRock Radio at this weekend's Sonisphere festival in the U.K. that he is working on two documentaries as a producer and director. "One is on the Atlanta hardcore scene, of which I was a part back when it first started," he said. "So I was sort of first generation of that whole thing. The film [titled 'All Alone Together: Neon Christ And Atlanta Hardcore'] sort of compares and contrasts the scene back then in its earliest days, and what we went through back then with the overwhelming sense from society at large that this is wrong, 'Our children are going crazy.' [The film] compares and contrasts our struggles with the struggles of kids who identify as punk and hardcore now. And particularly, we're talking about the really underground, the basement-show kind of punks, the people who keep it grass roots even today. What are their struggles now, with the Internet and with punk having been assimilated into the mass culture and all of that. It's an interesting thing that they face."

He continued: "And then the other [documentary I am working on] is on the jazz musician Milford Graves. He is one of the greatest musicians ever, but what really makes him interesting even beyond that is his scientific work. The guy is doing this amazing cutting-edge cardiac research. It's as exciting and potentially game-changing as any research that you can ever hear about going on in that field. And people are just starting to wake up to what he's doing and the philosophy behind it. Because he approaches medicine and science like a musician, so he really has an approach that no one else has."

DuVall — who cut his musical teeth in the '80s punk rock/hardcore scene with his former band NEON CHRIST — is working on the "All Alone Together: Neon Christ And Atlanta Hardcore" documentary with director Edgar Johnson.

Asked by CWG Magazine what the impetus was for him to help make this documentary and how he got involved, DuVall said, "I was first approached in 2005 by Edgar Johnson about making a NEON CHRIST documentary. However, while I always thought our story was interesting, I really questioned who else would care. It was a long time ago. Nostalgia is boring to me. Why would I want to foist that onto anyone else? 'Back in my day…' Whatever, fuck off! I want to know what kids are doing NOW. But when NEON CHRIST reunited for one show in February 2008 and all these 15- and 16-year-old kids were singing our songs back to us, it was very moving, and not just because it was a pleasantly surprising ego rush. It was more about what those kids and that club represented. The show took place at the Treehouse, a DIY all-ages storefront club in the Atlanta suburb of Lawrenceville. The energy and enthusiasm of the entire scene there was electrifying. Those kids were taking what we started, the real outsider/all-ages/DIY/basement punk culture and making it their own. That's when I knew we had our movie: Take two generations of outsider kids, nearly 30 years apart, and tell both their stories concurrently — what's different, what remains the same, why it all still matters."