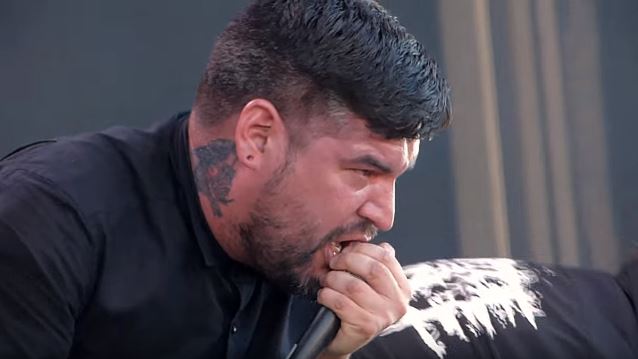 ALL SHALL PERISH: PHILIP ANSELMO's 'Actions Are A Stain On The Legacy Of PANTERA'

Oakland, California-based extreme metallers ALL SHALL PERISH have called out Philip Anselmo for the apparent "white power" gesture the ex-PANTERA singer made onstage after his appearance at Dimebash last week.

Anselmo performed the PANTERA classic "Walk" at the January 22 event at the Lucky Strike Live in Hollywood, California in honor of his late bandmate "Dimebag" Darrell Abbott. As he left the stage, he made a Nazi-style salute. He appeared to say "white power" as he made the gesture, but he later claimed he was referring to drinking white wine as part of an "inside joke."

ALL SHALL PERISH has released the following statement regarding the incident:

"We consider PANTERA to be the single greatest metal band of all time, but we should never be afraid to call out our heroes.

"Seeing Phil's actions and his cowardly justification is not only disgusting and inexcusable but antithetical to the punk, metal, underground ethos to which we subscribe.

"No gods, No masters, and certainly no master race.

"Talk with your black friends, if you have any, and try to gain some perspective.

"There has never, nor will ever, be a true incarnation of 'reverse racism' until white people are swinging from trees en mass, sold into torture, defined in the constitution as three-fifths a person, denied from public institutions and forcibly segregated from society.

"In the face of what an actual tit-for-tat reprisal would look like, affirmative action and understanding the significance and context of displaying black pride seem the least the multi-generational benefactors of being the master race can muster.

ALL SHALL PERISH co-founders Matt Kuykendall (drums),Ben Orum (guitar),and Caysen Russo (guitar) have rejoined forces with vocalist Hernan "Eddie" Hermida and guitarist Chris Storey in the revamped version of the band, which is currently working on new music.