ALL SHALL PERISH's 'Awaken The Dreamers' Lands On BILLBOARD Chart

"Awaken The Dreamers", the third full-length album from Oakland, California-based extreme metallers ALL SHALL PERISH, sold just under 5,000 copies in the United States in its first week of release to enter The Billboard 200 chart at position No. 126. The follow-up to "The Price of Existence" was recorded once again at Castle Ultimate Studios in Oakland with producer Zack Ohren.

Drummer Matt Kuykendall previously stated about the new album: "We have never been a band to write the same record twice and we have never enjoyed records that are one single and 11 worse versions of the same song. This record is the most diverse thing we have done to date. Every song is different and brings something new to the overall experience of the CD. When you look back to all the classic records of our time, they are full of all kinds of different songs. 'Vulgar Display of Power' just wouldn't be the same without 'This Love' and 'Hollow'. Our record is a breath of fresh air in a scene that is turning stale."

Finland's HardcoreSounds.Net conducted an interview with Matt Kuykendall on September 11, 2008 at Nosturi in Helsinki. Watch the seven-minute chat below. Also available is video footage from the Helsinki concert. 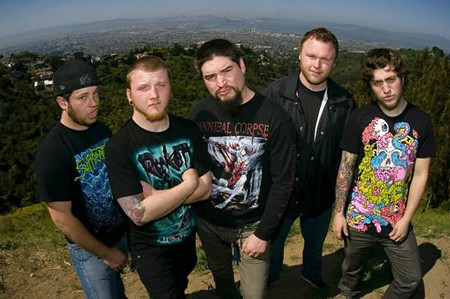