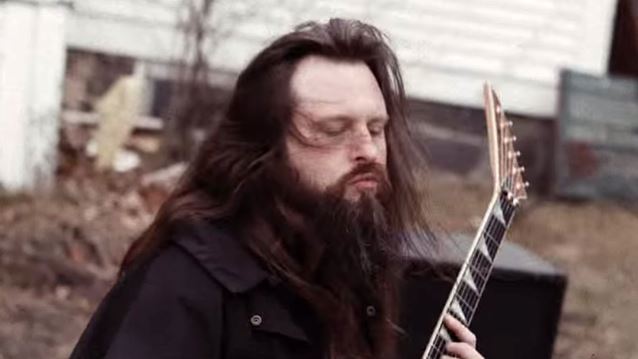 ALL THAT REMAINS Guitarist OLI HERBERT: 'We Try To Write Quality Over Quantity'

Capital Chaos TV conducted an interview with ALL THAT REMAINS guitarist Oli Herbert on Febraury 20 at Ace Of Spades in Sacramento, California. You can now watch the chat below.

Speaking about ALL THAT REMAINS's songwriting process, Oli said: "We'll start with a couple of different ideas, and then they progress into a song. If we feel the song is good, we keep it, we use it. But we try to write quality over quantity. So we might have extra riffs floating about, but nothing like 30 songs, or 40 songs. W ejust don't work like that."

Asked if he usually starts writing material for a new album when it's time to begin work on a new CD or if he also uses older ideas that have been collected over the years, Oli said: "It depends. I tend to write a little bit while we're on tour. But, usually, what I've been doing lately is kind of making a really big focus to start the writing process, when we get off the tour and just get into that mindset. 'Cause when you're on tour, it's hard to stay in that mindset for too long. 'Cause you've gotta work on the stuff you're playing that evening, so it's more of a balancing act. So when I get home and I have a stretch of a couple of months to really work on writing, I really work on writing."

ALL THAT REMAINS's new album, "The Order Of Things", was released on February 24 via Razor & Tie. The CD follows up the group's 2012' effort, "A War You Cannot Win", which featured the massive rock singles "What If I Was Nothing" and the chart-topping "Stand Up".

The new disc marks the first time that ALL THAT REMAINS singer Phil Labonte collaborated on his lyrics, in this case with producer Josh Wilbur. Labonte told The Pulse Of Radio how that worked out. "He's the first guy that I collaborated lyrically with," he said. "It's always been a situation where we'll come up with vocal ideas, maybe cadences, and I'll come up with the ideas and words that go into it. So this record has really been vocally the most collaboration I've ever had from a producer/writer, working with, you know, the songs we came up with."