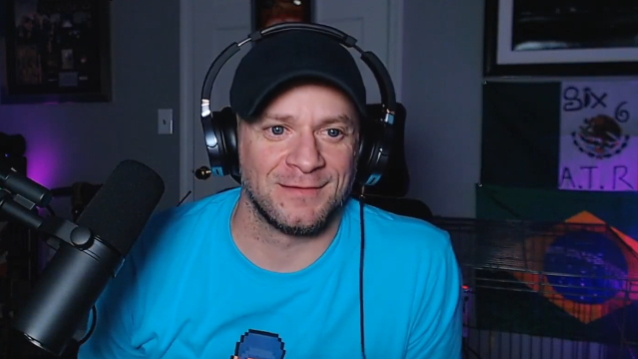 ALL THAT REMAINS Singer PHIL LABONTE Is Four Years Sober

During an appearance on the latest episode of "The Jasta Show", the Internet show hosted by HATEBREED's Jamey Jasta, ALL THAT REMAINS singer Phil Labonte revealed that he has been sober for four years.

"I just stopped," he said (see video below). "I don't know if I qualify as sober, because I haven't through AA; I just stopped drinking. I stopped because I got divorced and I hit a really low place. It was back in 2017, and it was January. And I'm, like, 'If I keep drinking, I'm probably gonna drink myself to death. So I've gotta put the bottle down.' And I just stopped. So I don't have a really good story or anything. I just was scared to die.

"My wife had left, and it was real dark," he continued. "And I was, like, 'Man, if I keep drinking, I'm either gonna…' I was a gun guy, and I've got a bunch of guns in my house. I'm, like, 'I've gotta make sure that I don't do anything stupid. If I keep drinking, I'm gonna drink myself to death, or some night I'm gonna get low and do something dumb. So I can't have booze around.' I was just, like, everything out of the house — I got rid of it all and just stopped."

Last August, Labonte confirmed to the FM99 WNOR radio station that ALL THAT REMAINS had commenced the songwriting process for the follow-up to 2018's "Victim Of The New Disease" album.

ALL THAT REMAINS guitarist Oli Herbert was found dead in October 2018 at the edge of the pond on his Stafford Springs, Connecticut property. He was reported missing by his wife and his body was found by police face down at the edge of the pond where the water was only a few inches deep. He has since been replaced by Jason Richardson, who has previously played with BORN OF OSIRIS and CHELSEA GRIN.

"Victim Of The New Disease" was released in November 2018 via Fearless in North America and Eleven Seven in Europe.