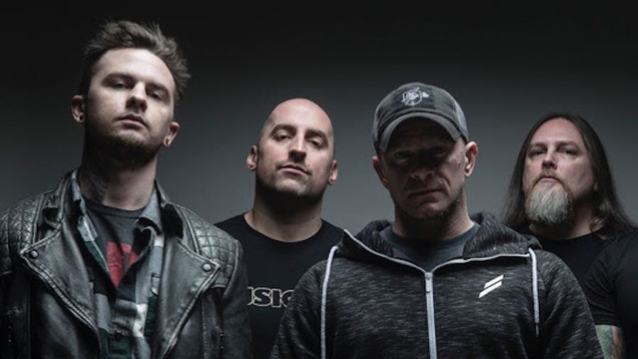 ALL THAT REMAINS Rejoined By Bassist MATT DEIS For Upcoming Tour

ALL THAT REMAINS will be rejoined by bassist Matt Deis for its upcoming U.S. tour celebrating the 15th anniversary of "The Fall Of Ideals" album.

Matt is stepping back into ALL THAT REMAINS as the replacement for Aaron "Bubble" Patrick who announced his exit from the band last September.

On Wednesday (February 2),ALL THAT REMAINS issued the following statement via social media: "ALL THAT REMAINS is thrilled to welcome back to the stage Matt Deis on bass and backing vocals. Some of you may remember Matt from our earlier material, we're stoked he is here, make sure to send him some love!"

Patrick joined ALL THAT REMAINS in 2015 following the departure of Jeanne Sagan.

"The Fall Of Ideals" was reissued last November. The best-selling title features such fan favorites as "This Calling", "Six" and "The Air That I Breathe". In addition to the wide release, the band has exclusive colored vinyl variants with deluxe packaging available only at the band's webstore.

In 2020, ALL THAT REMAINS vocalist Philip Labonte confirmed to the FM99 WNOR radio station that the band has commenced the songwriting process for the follow-up to 2018's "Victim Of The New Disease" album.

"Victim Of The New Disease" was released via Fearless in North America and Eleven Seven in Europe.

ALL THAT REMAINS guitarist Oli Herbert was found dead in October 2018 at the edge of the pond on his Stafford Springs, Connecticut property. He was reported missing by his wife and his body was found by police face down at the edge of the pond where the water was only a few inches deep. He has since been replaced by Jason Richardson, who has previously played with BORN OF OSIRIS and CHELSEA GRIN.

All That Remains is thrilled to welcome back to the stage Matt Deiss on bass and backing vocals. Some of you may...

Posted by All That Remains on Wednesday, February 2, 2022