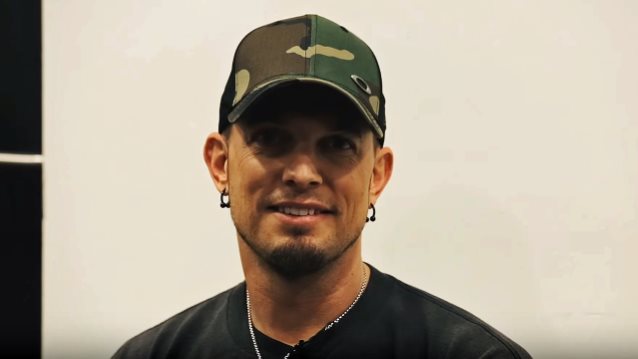 Sebastiano Mereu of From Hero To Zero recently conducted an interview with ALTER BRIDGE guitarist Mark Tremonti. You can watch the full chat below. A few excerpts follow (transcribed by BLABBERMOUTH.NET).

Mark: "The Internet took over and changed the whole game, pretty much. Back when we first started, you tried to get your demo on a local radio station and tried to get a record deal, and try to expose yourself by touring around close to where you live. Now, it's a whole new game. When people ask me advice on how to get started, it's the Wild Wild West, you don't know how to do it anymore. Still, it's essential to write a good song and get exposure, but the way you get exposure now is so different than the way it was before. Records don't sell as much anymore, so bands like us rely on live ticket sales, merchandising… It's a different world."

Mark: "The budgets are so different. Back in the day, you did these big-budget videos. Now, the record labels and you will allot a small amount of money. Directors are willing to do it for a fraction of the cost they used to. You try to find people with a good artistic vision to share the vision with you. We try to look at other people's videos to see if there are any other directors who are in the realm of what we want to see. That's what we did on the last video for 'Show Me A Leader'. We were happy with it. Even when we do the song live, we have the video playing in the background for visuals."

On how he manages to maintain a career in music even though there is less money to go around:

Mark: "You just have to work harder. I personally give guitar lessons on show days. We used to not have these big meet-and-greets, now we did just the other day, we had 150 people at our meet-and-greets for V.I.P. packages. You just have to put in the time, but the good thing about it is you get better personal relationships with your fans. You see some of the fans throughout whole tours and they're fans for life. Back in the day, people used to do that not as much. It's good and bad at the same time. The Internet has changed things in a lot of bad ways, but a lot of good ways."

On starting their own label, Alter Bridge Recordings:

Mark: "We had a licensing deal with Roadrunner. We went from Wind-Up to Universal, then we quickly got out of Universal, went to Roadrunner. Roadrunner was the first label that we loved working with. I think we had some kind of licensing deal with them; I'm not sure. Then Warner Bros. bought out Roadrunner, then all of the people we worked with and loved and trust were gone. In that period, I had done a couple of solo records where we created our entire new record label, where we found distribution, the promotion and everything for ourselves. When it came time to get a new deal for ALTER BRIDGE, all of these deals were coming in. I'm telling the guys, 'No, why have all of these middlemen? The old record label system doesn't work these days.' Then Napalm came around and kept on showing how much they wanted ALTER BRIDGE and it came to a point where we couldn't say no, so we said, 'Alright, let's work together.'"

On the current trend of bands using technology like backing tracks and samples to enhance their live shows:

Mark: "We've never had any backing tracks. The only tracks we ever play is maybe an introduction to a song that we can't play on an instrument. If you are a pop star, it might work, but as far as a rock band, I want to hear the real drums, the real guitar, the real vocals, I don't want to hear any backing tracks. We make sure when we record that we can perform it live without having to fake our way through it. As far as production, this is the biggest production we had on this tour. We just felt like the bigger venues, the fans, deserve a bigger show. We're doing our best to entertain everybody, but when you're way back in the bleachers, you want to see a good light show. We have a video wall; this is the first time we our using programmed video content. There's still room to grow. It's the biggest production we've had. But we're not a big pyrotechnic band. It wouldn't suit the band."

On his thoughts on the current state of the music industry:

Mark: "You just have to adapt. The record sales have gone away, so people have to get out there and work. Back in the day, you get a single played on the radio and you could sit at home and have a gold record and collect checks the rest of your life. Now, you have to go out and tour and earn your keep. A lot of bands go out there and lose money on tour. I appreciate every band that's out there touring. If a band is playing clubs, they're paying to pay, they're getting out there and working hard to do what they love to do. When I see people trash-talk any working musician, those people are putting everything they got on the line to do it. They're not in it for the fame and the fortune. They're doing it because they love music."

ALTER BRIDGE's fifth studio album, "The Last Hero", was released on October 7 by Caroline Records in the United States/Canada and Napalm throughout the rest of the globe. The CD was produced by longtime friend and collaborator Michael "Elvis" Baskette (SLASH, TREMONTI, TRIVIUM) and mastered by Grammy Award winner Ted Jensen.