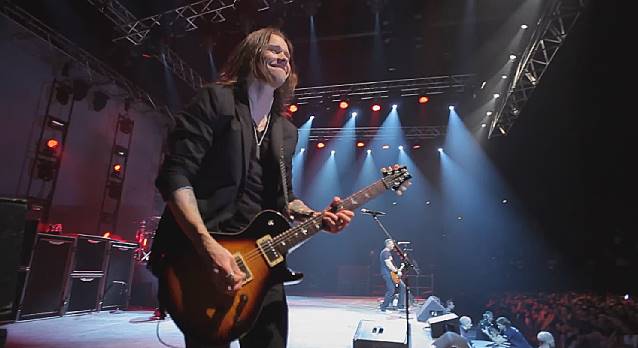 ALTER BRIDGE will release a new live CD, DVD and Blu-ray entitled "Live In Milan" in early June. The show was taped at the legendary Mediolanum Forum in Milan, Italy on November 12, 2013 in front of a sold-out crowd of over 10,000 fans. Shot in beautiful HD with 18 cameras and directed by award-winning filmmaker and longtime ALTER BRIDGE director Daniel E. Catullo III, the show includes 18 songs off all four of the band's studio albums. One of the tracks, an acoustic rendition of the ALTER BRIDGE song "Watch Over You", features a special guest appearance by HALESTORM's Lzzy Hale.

A trailer for "Live In Milan" can be seen below.

ALTER BRIDGE celebrated its 10th anniversary on January 6 with the release of "Alter Bridge X", a massive, 27-disc box set that was limited to just 3,000 copies worldwide. The set includes all four ALTER BRIDGE studio albums, along with DVD, Blu-ray, and vinyl audio copies of "Live From Amsterdam" and "Live At Wembley", including a 3D version of the latter. Also in the box was every webisode to date, hours of unreleased interviews and documentary footage, a coffee table book, a signed poster, and much more.

ALTER BRIDGE recently completed a headlining tour of Europe in support of its latest album, "Fortress", which featured the Active Rock Top 15 single "Addicted To Pain".

ALTER BRIDGE was started by the three instrumental members of CREED and guitarist Mark Tremonti told The Pulse Of Radio how ex-MAYFIELD FOUR singer Myles Kennedy became the final piece of the puzzle. "When we first started the band, we were desperately looking for a singer, and my buddy had brought me a MAYFIELD FOUR CD and, you know, hearing the CD, I was blown away — this guy's, you know, not doing anything right now and he's this good?" he said. "I made demos and sent 'em his way, and he sang over them and he seemed to be into the songs and we loved what he did and he flew down January 2, 2004, and we've been a band ever since."