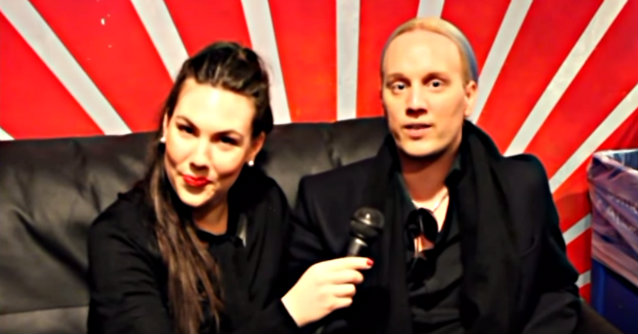 AMARANTHE Guitarist Talks About Downsides Of The Rise Of Technology

On February 14, Alicia Trejo of Access Unlimited TV conducted an interview with vocalist Elize Ryd and guitarist Olof Mörck of Swedish melodic metallers AMARANTHE prior to their show at the Gothic Theater in Denver, Colorado. You can now watch the chat below.

Speaking about how some of AMARANTHE's songs tend to be written about feeling alienated by technology and modern life, Olof said: "The 'Digital World' song sort of describes [how] technology and that kind of futurism and post-modernism is sort of a double-edged sword. Because on one hand, if you show to Isaac Newton or Albert Einstein that you could contain the combined knowledge of humanity in just a smartphone and you could have access to it at any place or at any time, then they would be extremely impressed. But at the end of the day, we are using it for a lot of pointless social media. So if you walk into a café, like in Denver or Englewood, there will be a lot of youngsters just, instead of interacting with each other, they will just watch random cat videos on Facebook. There's a lot of good things that come with technology, and I think that the 'Digital World' song describes that. And it's also a little bit of a sarcastic or ironic thing, because we are sort of a digital band, with a lot of keyboards and stuff like that, but our hearts are very 'un-digital,' if you know what I mean — very analog."