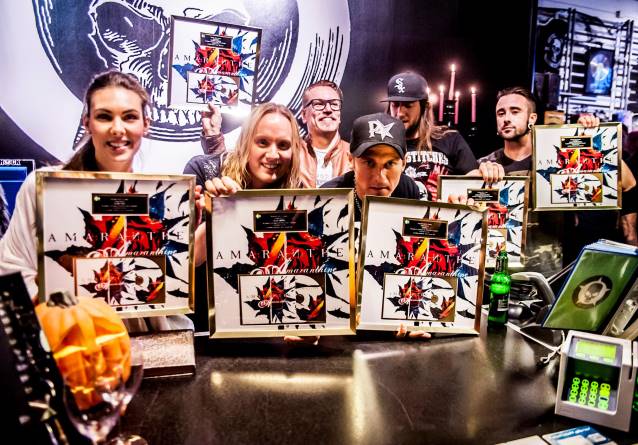 After long and careful consideration, Andreas Solveström has chosen to step down as the "growl" vocalist in the Swedish melodic metal band AMARANTHE. The group states: "The split is completely amicable and friendly, and not the result of any hard feelings. Andy has been a brother through the last two and a half years of craziness since the release of our debut album, and he will always be a central part to the AMARANTHE family — not to mention a fantastic screamer indeed. We wish him all the best possible luck with his future endeavors.

"But, as they say, life goes on! We in AMARANTHE are not planning to slow down one bit, and now is the time to welcome a new member into the AMARANTHE family! Many of you have already seen and met Henrik Englund Wilhelmsson (SCARPOINT),who was filling in for Andy on our latest European and American tour! Henrik has great stage presence, tons of charisma and a great voice, and has already proven up to the extremely high standard we always strive for with AMARANTHE."

Commented Andy: "Time travels fast. There is so much in life to explore and time has come for me to move on and see what more is out there for me. We've been through a lot the last five years, had our ups and downs, travelling the world back and forth, playing arena shows, doing tons and tons of gigs, gotten gold records and all this in just two albums. Totally amazing, and I'm really glad and humble to have had the chance to experience all this. Now when I choose to move on, I want to take the opportunity to thank the guys in the band for all the good times and all the memories. And, of course, all the fans out there. You are, and always will be, in my heart. Hope to see you guys out there again in a not-too-distant future."

In other news, AMARANTHE's "Amaranthine" single has been certified gold in Sweden for sales in excess of 20,000 copies. (Note: On-demand audio and/or video song streams are now counted towards the threshold required for gold certification.) This is the band's second single to reach gold status after "Hunger" achieved the same status earlier this year.

AMARANTHE's sophomore album, "The Nexus", sold around 1,700 copies in the United States in its first week of release. The CD landed at position No. 12 on the Top New Artist Albums (Heatseekers) chart, which lists the best-selling albums by new and developing artists, defined as those who have never appeared in the Top 100 of The Billboard 200.