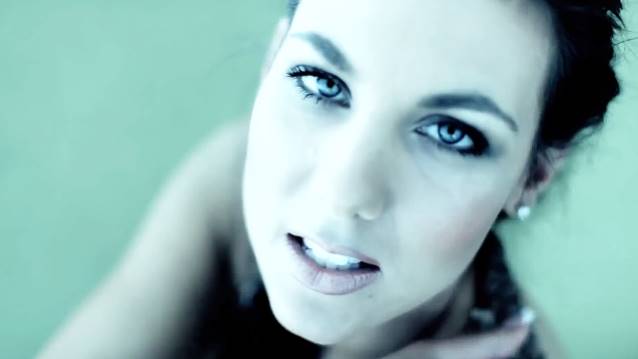 AMARANTHE Singer ELIZE RYD Slams 'Internet Haters': ' It's A Shame How Low Some People Can Go'

Elize Ryd (born Hanna Elise Isabella Maj Höstblomma Ryd),the 29-year-old frontwoman of the Swedish band AMARANTHE who has also toured the world as a backing singer for KAMELOT, has posted the following message on her official blog:

"I just wrote in my previous post that I love people. BUT I got a reminder today…

"Sometimes when I wake up in the morning, some idiotic 'hater' has written really bad and disrespectful things on my official Facebook page. I do not in the world understand why?? There must be so many other things and people to hate out there. You have rapists, murderers, those who are bulling other people (like I experience once in a while),people who abuse children and animals… Cancer!! Do I need to continue?

"It's an ever-lasting question to me why some people love to write fucked up comments to someone they actually don't even know. One thing they usually have in common is that they are sick or jealous.

"Actually, I know AMARANTHE's and my fans out there are amazing people. I been touring over 4 years and got the honor to meet the most fantastic people; you know who you are and you know I love you. We, like most people on earth, share the same thoughts and have the same sight on life, I'm very glad because of that.

"If you feel that you are not one of those people, please just leave us alone and learn to shut the fuck up! Is it so hard, really?

"Please if you notice that someone around you writes bad stuff to another on the Internet, remind them to think twice before posting it. And to those who are Internet haters, it is a crime in Sweden.

"OK, I don't get many stupid comments from people, they pop up maybe once every year. But this comment doesn't only affect me. This guy does obviously have a really bad sight on women. All I can say to you is… I think what you wrote and how you react towards me and the band is sad, weak and extremely pathetic. Most of the things people write (like you did) are words you probably would not be cool enough to tell to my face. I hope you are happy now that I gave you some extra attention.

"It's a shame how low some people can go…

"The most important for me right now is to do my best to STOP this kind of stupidity. It makes a lot of people very hurt, and depressed, nobody deserves to read shit like this.

"I have to post this so that at least I show that it happens to me, and that I don't think it's OK!!! So just stop Internet bulling people and STOP insulting women. Too many have already got seriously damaged and even committed suicide (mostly young women) because of this phenomena 'Internet hate.'

"I'm 100% against both Internet hate and women's oppression. We need to say NO as soon as we notice there are people out there continuing feeding it."

AMARANTHE has confirmed an autumn 2014 release date for its new studio album via Spinefarm Records. The as-yet-untitled outing will be the follow-up to "Amaranthe" (2011, now gold in Sweden) and "The Nexus" (2013).

AMARANTHE's first two releases, which defined the band's approach through their signature blend of musical styles and voices, caused an international stir right from the start; not only did "The Nexus" top the rock chart in Sweden, but it went straight to No. 1 on the U.S. iTunes Metal chart, while the videos (from both albums) have continued to clock up millions of views ("Hunger", from "Amaranthe", is now at the 6-million-plus mark).

The success of these records saw AMARANTHE playing to audiences all over the world, and now — following shows across Europe, including an appearance at the Bandit Rock Awards in Stockholm where one of the band's three singers, Elize Ryd, received the "Rock 'N' Role Model" award — the six-piece will head back into the studio.