After touring the world this past year in support of their latest album, "Jomsviking", Swedish death metallers AMON AMARTH will head back out on the road this spring for a U.S. tour with Metal Blade labelmates GOATWHORE. Starting April 30 and running through May 21, the journey will also see AMON AMARTH making appearances at some of the country's premier music festivals, including Welcome To Rockville, Carolina Rebellion, Dark Lord Day, Northern Invasion and Rock On The Range.

AMON AMARTH comments: "United States! We return to your lands this spring and we will raid and plunder your little cities as we please. For the first time, we will be sailing our longships towards the curious native celebrations called 'The Loudest Month' (Welcome To Rockville, Northern Invasion, Carolina Rebellion and Rock On The Range) where we will sack and burn them to the ground and feast on the spoils. Our good friends in the almighty GOATWHORE will be joining us on this voyage on all headlining shows. You have been warned."

GOATWHORE vocalist Ben Falgoust adds: "We are looking forward to hitting the road with AMON AMARTH and playing some raw-as-fuck metal for you people. Show up with your anger and let's make some chaos happen. I know you all need to vent some issues. Let's do it together and crush the opposition."

Jocke Wallgren was named AMON AMARTH's new permanent drummer in September. Jocke had been sitting behind the kit for all shows on the group's current "Jomsviking" world tour. 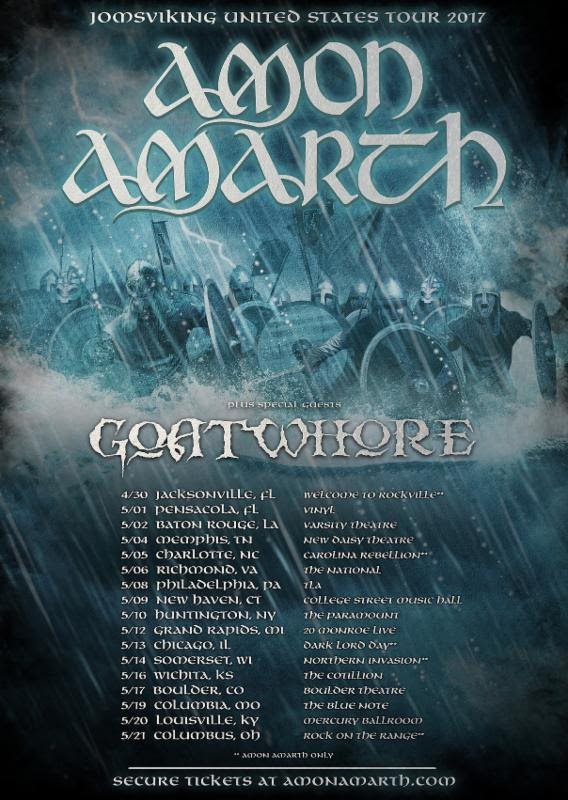