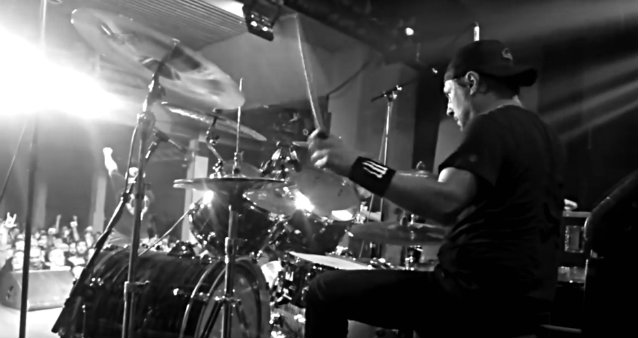 Hardcore Worldwide has uploaded drum-cam footage of Dave Lombardo performing with SUICIDAL TENDENCIES on January 18 at Astra in Berlin, Germany during the "Persistence Tour". Check it out below.

Lombardo made his recorded debut with SUICIDAL TENDENCIES on the band's latest album, "World Gone Mad", which came out at the end of September.

"They wanted me to be myself and their music is very drum friendly with some amazing structuring and vocals and lyrics," Lombardo told NorthJersey.com about the effort. "They gave me the freedom to do what I wanted and I gave the songs what I felt they needed."

Dave added that playing SUICIDAL's classic songs live "brings back some really good memories. I remember driving the van on one of our early SLAYER tours and me and [late SLAYER guitarist] Jeff Hanneman would listen to their first record and switch off singing the lyrics."

SUICIDAL TENDENCIES frontman Mike Muir said in a recent interview that Lombardo added a new dimension to the band's musical approach. "It's interesting, because a lot of people, obviously, associate [Dave] with the SLAYER sound," he said. "On some of the SUICIDAL songs, it's different musically, and you can see how really a tremendously diverse drummer that he is. I think some of the songs, obviously, people that love his drumming, they're gonna hear it and they're gonna really, really, I think, enjoy it. He's really excited about it. He's getting to play some different kind of things, and it just brings a whole different intensity and rhythmic feel to the band. And he's definitely got the Cuban thing going on, that Latin flavor, where he gets to do a little bit more in SUICIDAL than he did in SLAYER. I think you hear it and you definitely know it's Dave, but it definitely takes us to another level."