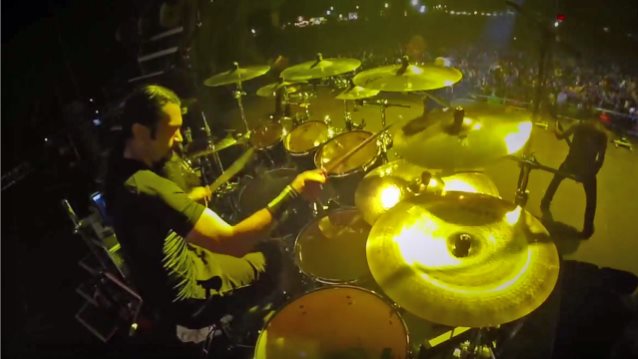 Drum-cam footage of AMON AMARTH's Jocke Wallgren performing the song "As Loke Falls" with his bandmates on October 1, 2016 at the 1st Bank Center in Broomfield, Colorado can be seen below (courtesy of Sick Drummer Magazine).

AMON AMARTH bassist Ted Lundström told "Le Tour Du Metal" about Wallgren: "He's a super-solid drummer. Very professional, very on-the-spot all the time. He's a fantastic drummer. It gives us more stability because he plays perfect all the time. Now we have to step it up. [Laughs] It much easier to play if you have a drummer who is [tight]. It makes our lives easier."

Asked what it has been like touring with AMON AMARTH the past few months, Jocke told Austria's Metal Underground: "It's great. It's really good. It's a lot of difference from my other tours I've been doing with my other bands. So, yeah, I can't say anything more than I'm pretty stoked about it. It's super fun every day. The crowd is good, the crew is good, the band is great. [It's] perfect."

Regarding whether it has been hard to find time to tour with AMON AMARTH while still staying involved with his other bands, Jocke said: "Not anymore. AMON AMARTH is my only band right now. It's not official yet [laughs], from the VALKYRJA camp. But I think everyone understands that it's not possible to have a big band as AMON AMARTH and also have other bands, because I'm not home very much. So I'm pretty much on tour, I would say, three fourths of the year, so it's really hard to have other stuff going on as well."