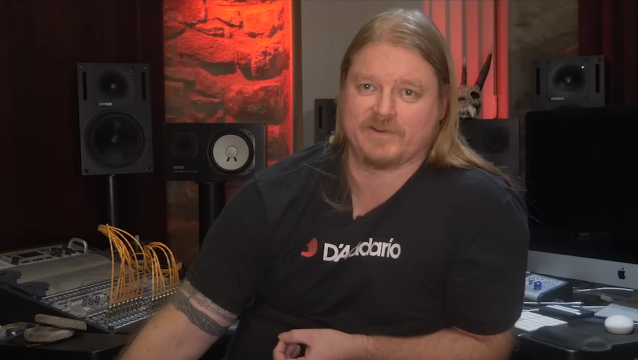 AMON AMARTH Guitarist On Downside Of Touring: 'There's Nothing Fun In Traveling'

In a new interview with "The Rockman Power Hour", guitarist Olavi Mikkonen of Swedish melodic death metallers AMON AMARTH spoke about the struggles of the touring lifestyle, particularly as it relates to his family life. He said (as transcribed by BLABBERMOUTH.NET): "It is what it is, and there's no way to change that. The only way to change that is to stop playing in a band. And I think it is what it is; I think that's the easiest way to put it. I mean, obviously there's downsides to it. 'Cause I'm traveling so much with my work, I don't really like to travel privately. And I hate that I miss stuff that happens. If something's gonna get broken at home, it always breaks down when you left. It happens on the fucking cab ride to the airport. That's when the water pipes, or whatever, are gonna start leaking. And I fucking hate that. But it is what it is. And luckily I have a good woman that understands that it is what it is. And whenever I'm home, I'm trying my best to do what needs to be done. But if I'm not home, I'm not home. And that's the life we have."

Asked if he still gets excited about touring and going back on the road after spending a lot of time at home, Olavi said: "Oh yeah. I mean, playing live is the reason you actually make music — no doubt about that. But then, of course, there's nothing fun in traveling. There's no fun in sleeping in new beds every fucking night. I mean, the older you get… It was easy 20 years ago when you were totally hammered, you could fucking sleep on whatever couch or sofa or whatever, but now, when you get older, if you sleep in hotels every night, the bed is different [and] it's difficult to get used to it, like pillows and whatnot. And, you know — it is what it is."